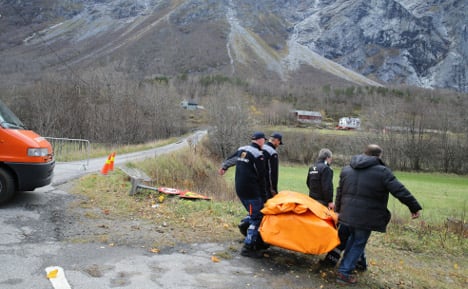 Chief geologist on site, Lars Harald Blikra said it is difficult to predict exactly when parts of the mountain  tumble down, but that it is “fairly probable” that it will happen on Tuesday.

Rocks have already been heard and seen tumbling down from the mountain which is a forewarning that a rock fall is highly likely. There has also been more heavy rainfall in the region which has placed the area on "red alert"

Jarle Hole is one of the geologists on duty monitoring activity. Hole said to NTB: “There has been large movements during the night in the area that the avalanche is expected to come from. At the same time, we have registered rain in the measuring stations on top of Mannen.”

Experts believe that the heavy rainfall expected in Rauma in Møre og Romsdal on Tuesday may trigger the avalanche from “Mannen”. Everyone seem to agree that it will happen, but noone knows when it's going to occur.
Hole says: “It is very difficult to say when the avalanche will come, but something will happen soon, even though I cannot say whether we are talking about 24 hours or several days.”

The Norwegian army are assisting the police with make safe and barricading the area around the “Mannen” mountain massive and establishing listening posts in the mountain area. Early morning Tuesday, they reported that they heard sounds of rocks tumbling down from the part of the mountain at most risk from avalanche.

People in the surrounding area, close to the mountain, have been advised not to inhale the dust that is expected to be with the avalanche.

In a press conference on Tuesday morning, the local government informed the public  that it is “not smart to inhale” the dust. At the same time, they gave an update on the situation on the Mannen mountain in Rauma. The movements happening this week are the largest that have ever occurred in the area.
Chieg geologist Lars Harald Blikra said to NTB: “It is fairly probable that we will have an avalanche today [Tuesday], but the exact point of time is difficult to predict.”

Police on Monday evacuated the area in the Romsdal region of South Norway.

Nordmøre and Romsdal police imposed a ban on members of the public staying below Mount “Mannen” [“The Man”] due to the high risk of there being an avalanche involving sliding rock.

Police chief Arnstein Nilssen, speaking at a press conference on Monday, said: “Because of the risk of an avalanche and sliding rock masses from the mountain, an order has been given to prohibit anyone staying below 'Mannen’. This is in effect from 2pm today [Monday] and until further notice.”

On Monday chief geologist Lars Harald Blikra informed there was more movement in the part of the “Mannen” mountain where an avalanche is expected to start from.

Blikra said: “On Sunday evening, from 10am until 2 or 3am during the night, we entered an acceleration phase. The speed of the sliding increased from one hour to the next.”

Having studied the amount of rainfall and the rock movements more closely on Monday night, the chief geologist concluded the slide is moving quickly.

Blikra said: “It started raining around 10am [on Sunday], and we saw the increased movement sometime before 10pm. The slide reacts quickly and picks up speed.”

Blikra believes only a little more rainfall in the area is needed before the first rocks tumble down the “Mannen” mountain.

On Sunday night, 14 to 15 millimetres of rain fell over the avalanche endangered area.

Increasing rainfall is forecast for Monday, with a predicted spike of up to 22.5 millimetres an hour on Tuesday night. “With increased movement, it can happen very quickly. So it might take another 24 hours until we get a collapse,” said Bikra.

When the avalanche breaks through the lower part of the mountain massive, up to 120,000 cubic meters of mountain mass could tumble down.

Last Wednesday eleven people were evacuated from the area where it's now not allowed to be.