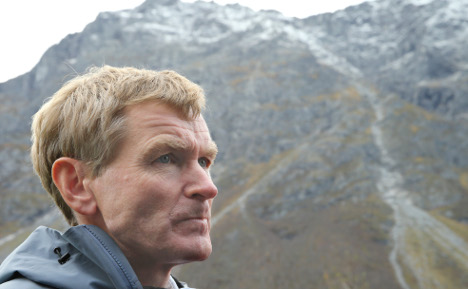 It was predicted that after heavy rains the avalanche would finally happen on Tuesday, however latest claims suggest the mountain may stabilize and no avalanche will occur.

Chief geologist Lars Harald Blikra fears the Mannen will stabilize without any avalanche being triggered.

Experts are having a difficult time reading the movements of the mountain masses.

Blikra said at a press conference on Tuesday evening: “I'm unsure of what's happening. It’s difficult to understand the dynamics up there.”
Earlier in the day, the geologist predicted an avalanche from “Mannen” was likely on Tuesday evening, maybe as late as around midnight. But the situation is chaotic, and the measurements difficult to interpret, he warned.
Another Norwegian geologist was more conservative in his estimates. Jarle Hole said to NTB: “There has been large movements during the night in the area that the avalanche is expected to come from. At the same time, we have registered rain in the measuring stations on top of Mannen.”
Blikra said: “We're a bit afraid that it will stabilize. We hope that it has gone so far that there is no way back.”
He believes the best outcome is for the avalanche to set off for the good of the residents below the mountain.
The geologists have shortened the intervals from 30 minutes to 15 minutes between each measurement in order to attempt to read the movements better. The amount of rainfall has kept quite stable over Tuesday, but during the evening precipitation has come in the form of snow.

Blikra stated the likelihood of the mountain stabilizing is greatest if the rain stops and the temperature falls.

He pointed out that, until now, there was no signs of stabilization.
Blikra says: “Now it is rather the opposite.”
He added: “The movements have been varying a lot. The development is a bit chaotic, but in general, the movements have increased.”