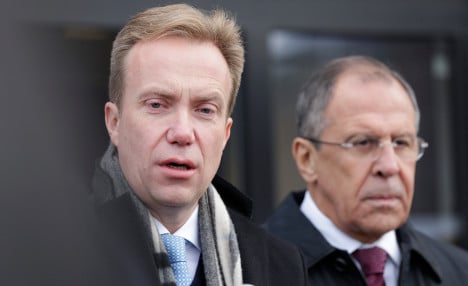 The event which took place in Kirkenes, North Norway had its mood dampened due to the current Ukraine-Russia conflict and the associated political tensions between Norway and Russia.

King Harald of Norway, Prime Minister Erna Solberg, Minister of Foreign Affairs Børge Brende and his Russian counterpart Sergey Lavrov all took part in the 70th anniversary of the liberation of Eastern Finnmark on Saturday.
Both countries exchanged diplomatic shows of gratitude for the enormous Soviet Russian effort to liberate Northern Norway in 1944.
Yet Solberg also took the opportunity to renew her criticism of Russia’s actions towards Ukraine.
“We are not the ones needing to improve our relationship to Russia. It is Russia needing to improve their relationship to the rest of the world and to respect international law,” Solberg said to NTB.
"Russia must abstain from giving more support to the separatist movement and the rebels in parts of Ukraine,” Solberg added.

The two countries foreign ministers, Lavrov and Brende, met for the first time since the crisis in Ukraine began, and there was clear division of opinion:

Brende said: “Over this point we've chosen to disagree. Today we celebrate 70 years since the liberation of Finnmark.”
Russia's Minister of Foreign Affairs, Lavrov said: "We have discussed general issues during this lunch in good and constructive, open and honest exchange of opinion.”
In March this year Russia annexed the Ukrainian Crimea peninsula, and this spring a separatist rebellion arose in eastern Ukraine. Norway believes that Russia actively has supported the rebellion and has introduced sanctions against their neighbouring country, which has answered with counter-measures.
Brende said: “Lavrov's visit today underlined that it is possible to have a stable cooperation, but with the limitations that the situation in Ukraine puts on this cooperation.”
But Lavrov pointed out that various sanctions don't contribute to furthering Norwegian-Russian cooperation.
Lavrov said: “Of course the different restrictions introduced don't help cooperation. And finally we hope that good sense will prevail.”
Even if the political relationship is cool, the gratitude and respect for the Soviet Union’s war effort in the North 70 years ago was warm.
King Harald of Norway said in his speech at the market place in Kirkenes to Russian representatives present: “Norway thanks you”.
“These are three simple words, but more are not needed. They contain what we felt at that time and what we feel here today.”
Norway's King reminded people that almost 13,000 Soviet prisoners of war died in Norway and rest in Norwegian soil.
Later on Saturday the special guests at the ceremony moved on to Bjørnevatn tunnel in Kirkenes. This tunnel was the site of the Russian invasion to free east Finnmark and it was granted historic protection as part of Saturday's anniversary celebrations.
Around 3,500 people sought refuge in the tunnel as the battle for liberation was fought. In the building, known as Rørbua, the Norwegian flag was raised after the liberation and a new Norwegian government was established.
The celebration is also a reminder that the Nazis evacuated tens of thousands of people by force and vandalized the whole county before their retreat.
Solberg reminded people in her speech that: “The German retreat was merciless. In October 1944 Finnmark was set on fire. In Kirkenes, only 28 of 1,000 houses were left standing.” King Harald at the monument of war time mothers at the square of Kirkenes during the 70th anniversary
of the liberation of Eastern Finnmark in Kirkenes on Saturday. Photo: Berit Roald / NTB scanpix