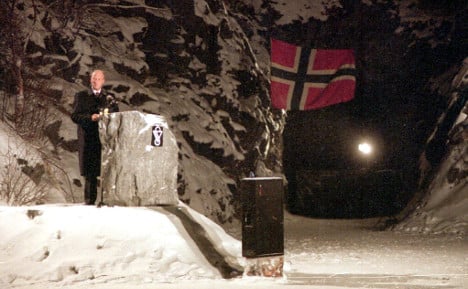 It is 70 years on Saturday October 25th since the Soviet Union entered the eastern part of Finnmark during World War II. The liberation of East Finnmark happened six months before the rest of Norway was freed from German occupation.

King Harald of Norway, Prime Minister Erna Solberg, and Norway's Minister of Foreign Affairs Børge Brende will all join the Russian politician to take part in a special ceremony at Kirkenes market square. There will also be another ceremony at Rørbua and the Bjørnevatn tunnel at AS Syd-Varanger.
Rørbua is a shelter located beside the tunnel where more than 3,000 people sought shelter in October 1944. The Red Army on October 25th made their way to the shelter and liberated those hiding there.
Many children who were in the tunnel at the time and are still alive today are invited to the event in Bjørnevatn on Saturday. The tunnel and the so-called Rørbua shelter will be granted status as protected buildings by the Norwegian government.
The Rørbua shelter was used as a common bathing facility for mine workers before World War II.