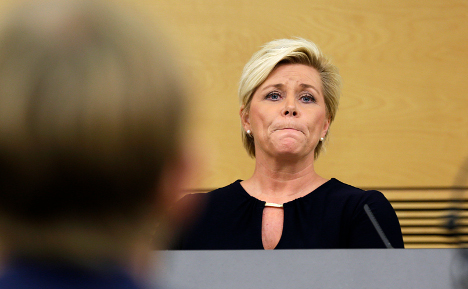 The savings were revealed in a letter from Norway's Minister of Finance Siv Jensen (Progress Party) to the Liberal Party.

Jensen did not mention how much the government would save when she announced the budget for 2015 this month, newspaper Bergens Tidende reports.

The Norwegian government will make cuts in child support for disabled parents by removing the variable maximum sum of up to 35,000 kroner ($5,300) and replacing it with a 'one size' support amount of 7,020 kroner per year ($1,000). The cut will be in effect from 2016, with a gradual reduction on the amount until 2018.
The saved amount of 590 million kroner ($90 million) will be reached in 2019, according to Siv Jensen in her answer to the Liberal Party.
Liberal Party MP Sveinung Rotevatn said to NTB that his party supported the idea of getting more people to work, but not at the expense of the weakest.
Rotevatn said: “The government proposes a large loss of income for vulnerable groups. We will not support this. The budget is not good for vulnerable groups.”
Chairman of the Socialist Left Party, Audun Lysbakken, during question time at parliament this week, commented to the fact that the Norwegian government will save 590 million kroner a year on cutting the child benefit for disabled parents, something that he called “a solid contribution to Solberg's tax party for those who have the most”.
He wanted to know if the Norwegian Prime Minister is thinking of those who actually cannot work and whether their children will get better or worse conditions with the proposition from the government.
Solberg answered: “I don't underestimate the fact that some will get worse conditions.” She underlined not everyone sitting in a wheel chair cannot work.
She said: “The long term goal is that more people will work, and then we must see to it that working will not become unprofitable.”
All the opposition parties are against the proposal – including the support parties of the government, like the Christian Democratic Party and the Liberal Party.