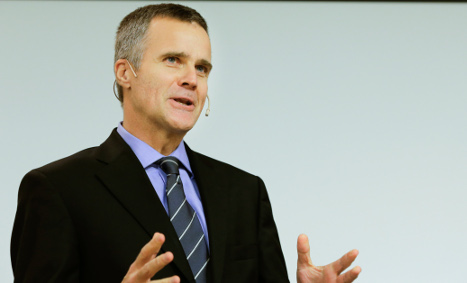 Former Statoil CEO Helge Lund is moving to work for BG. Photo: Berit Roald / NTB scanpix
Lund stepped down from his position with immediate effect, but will still be available to Statoil until his termination period ends on March 1st 2015. He has been the CEO of Statoil for 10 years.
Helge Lund is the first Statoil chief who was not forced out of his job due to any scandal connected to the company. All the six previous top leaders since the company was founded in 1972 had to go after criticism or revelation.
The Norwegian will join BG Group as their new CEO from March 2nd. The company is a world leader in energy exploration, especially liquid natural gas.
Oslo stock market reacted to the news with Statoil stock down by 2 percent when the markets opened on Wednesday. Similarly, BG stock value went up by 1.7 percent in London and became one of the stock market’s most bouyant on the day.
Lund gave a public statement on Wednesday: “I could have continued for a longer time, but there is a time for everything. Renewal is important, both for Statoil and for me. After a long evaluation, I concluded that the time has come for a change. I have both the will and the energy to accept another leadership challenge and I figure this opportunity is the right one.”
According to BG Group, Lund will get a basic annual salary of 15.7 million kroner ($2.4 million) in his new position. In 2012 he earned 14.4 million kroner ($2.2 million), while his salary last year was 13.8 million kroner ($2.1 million).
Above his basic salary, the fiveyear contract between Lund and BG Group contains an agreement about an annual benefit of 30 percent of the basic salary, compensating for pension money, a bonus of up to 200 percent of his annual income and a long term bonus arrangement on up to 9 million pounds annually. This could potentially amass to 94 million kroner ($14.3 million) over the five years.
Lund will also receive stock in BG Group worth £12 million over the contract period.
Mark Todd, press officer at BG, told NTB: “9 million pounds (94 million kroner) is the maximum level of the agreement, but a realistic estimate is that this will be on around 4 million pounds (42 million kroner) a year.”