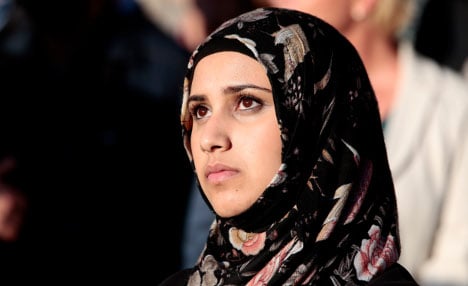 Faten Mahdi Al-Hussaini received the Bergen Prize (Bergensprisen) for 2014. She lifted one of Norway's top social accolades for her commitment to fighting terror and confronting potentially violent extremists in Norway and overseas.

The 19-year old jons Pakistani Malala Yousafzay, 17, the 2014 Nobel Peace Prize winner. Both girls are the youngest ever recipients of their respective awards in the history of both prizes.

The prize of 1.15 million kroner ($175,000) is divided between the charity of the prize winner's choice, who receive 1 million kroner and 150,000 ($22,500) kroner goes to Al-Hussaini herself.
Following the award the Bergenstiftelsen (Bergen Foundation) stated: “Faten Mahdi Al-Hussaini personifies, in a courageous way, a widespread movement where different religions, values and beliefs stand together in an inclusive front, using their freedom of speech to fight prejudice, extremism, use of violence and suppression from individuals and environments.”
Al-Hussaini was head speaker at a recent demonstration in Oslo against extreme Islamists and the group “Profetens Ummah” (Prophet's Ummah) at the end of August this year.
She received several threats after the event, but a great amount of public support too.
She stated to NTB: “Threats are not to be feared. What you might fear, is not to be allowed to raise your voice.”
The Bergen Prize is an annual prize given to a person or institution who has performed “excellent work within activities of common interest”. The prize consists of money, plus a statuette of Per Ung. Bergenstiftelsen, who issues the prize, was established by shipowner Sigvald Bergesen Junior in 1975.
The 2014 prize will be awarded in a ceremony in Oslo on November 3rd. Faten Mahdi Al-Hussaini joins the list of illustrious past winners of the Bergen Prize who include Karpe Diem, Wenche Foss, Shabana Rehman, Kadra Yusuf, Frederic Hauge and Simon Flem Devold.