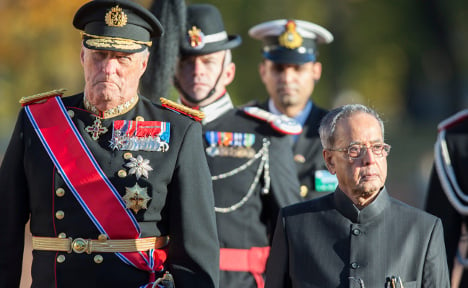 The President is in Norway on a state visit with his daughter, invited by the King of Norway.

Later on Monday, Mukherjee will be guest of honour at a gala dinner at the Royal Palace hosted by the King and Queen of Norway.
On the program for Mukherjee's tour is also a visit to the Norwegian Parliament, where India's President will meet parliament president Olemic Thommessen, plus the President will take in a visit to Oslo's Fram museum.
On Tuesday, President Mukherjee will meet Prime Minister Erna Solberg and make a visit to the Munch museum, as well as take part in a meeting at Næringslivets Hus (The House of Business) to discuss potential cooperation between India and Norway on business, research and education. This is the first ever official Indian state visit to Norway.
The President was asked by the media to acknowledge his reaction to this year's Nobel Peace Prize. President Mukherjee said: “I congratulate the Nobel Committee for choosing these winners, Kailash Satyarthi from India and Malala from Pakistan, to receive this year's peace prize.”
He has already personally congratulated both Satyarthi and Malala Yousafzai, who share the Peace Prize for their struggle against suppression and children's right to education.
The President said: “Satyarti has for a long time been an acknowledged social activist and has received a lot of international prizes. Receiving the Nobel Prize is however different. It is great. We appreciate that the Nobel committee chose him.”
The President of India would however not answer questions on the awarding of the Peace Prize to India and Pakistan possibly helping find a solution on the long-lasting conflict between the two countries.
“This conflict is a completely different issue. According to the constitution of India, the President cannot make any political statements. This is an issue for the politicians to solve,” President Mukherjee said to NTB.