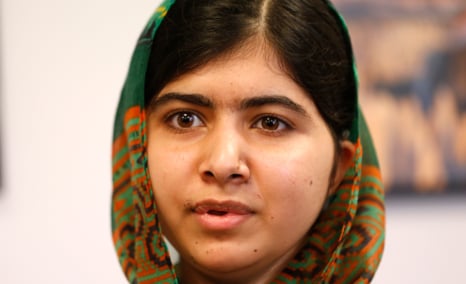 The Norwegian Nobel Committee has decided that the Nobel Peace Prize for 2014 is to be awarded to Kailash Satyarthi and Malala Yousafzay for their struggle against the suppression of children and young people and for the right of all children to education.

The Nobel committee decreed he Prize is shared equally between the two of them, having been active in the effort against child labour.

At just 17 years old, Yousafzay is the youngest ever Nobel Peace Laureate. The teenager was shot in the head by Taliban gunmen two years ago for campaigning for girls' education. She now lives in Birmingham in the UK.
Pakistan Prime Minister Nawaz Sharif congratulated Malala Yousafzai, calling her the "pride" of his country, reported the BBC.

"Her achievement is unparalleled and unequalled. Girls and boys of the world should take the lead from her struggle and commitment," he said.

Satyarthi, 60, is an Indian children's rights activist who has headed various forms of protests and demonstrations. He is said to have freed over 80,000 children from servitude.
After the announcement, Norwegian Prime Minister Erna Solberg gave a congratulatory speech in Parliament Square in Oslo. Solberg praised the Nobel Committee for choosing good Peace Prize winners, addng that schooling and education are critical in the effort against conflict and extremism.
The Prime Minister said: “The Prize winners’ engagement to secure children's rights and education has inspired a whole world.”
She congratulates the Peace Prize winners and refers to the justification of the Nobel Committee, where their effort against suppression of children and youths and for children's right to education are emphasized. It is a requirement for a peaceful development globally that the rights of children and youths are respected.
The Norwegian Prime Minister said: “Education is the most important thing we can give our children. Education helps children out of poverty and secures children's rights. This is a requirement of peace and sustainable development.”
Following their decision, the Nobel committee said: "It regards it as an important point for a Hindu and a Muslim, an Indian and a Pakistani, to join in a common struggle for education and against extremism".

"The Norwegian Nobel Committee has decided that the Nobel Peace Prize for 2014 is to be awarded to Kailash Satyarthi and Malala Yousafzay for their struggle against the suppression of children and young people and for the right of all children to education. Children must go to school and not be financially exploited. In the poor countries of the world, 60% of the present population is under 25 years of age. It is a prerequisite for peaceful global development that the rights of children and young people be respected. In conflict-ridden areas in particular, the violation of children leads to the continuation of violence from generation to generation.

"Showing great personal courage, Kailash Satyarthi, maintaining Gandhi's tradition, has headed various forms of protests and demonstrations, all peaceful, focusing on the grave exploitation of children for financial gain. He has also contributed to the development of important international conventions on children's rights.

"Despite her youth, Malala Yousafzay has already fought for several years for the right of girls to education, and has shown by example that children and young people, too, can contribute to improving their own situations. This she has done under the most dangerous circumstances. Through her heroic struggle she has become a leading spokesperson for girls' rights to education.

"The Nobel Committee regards it as an important point for a Hindu and a Muslim, an Indian and a Pakistani, to join in a common struggle for education and against extremism. Many other individuals and institutions in the international community have also contributed. It has been calculated that there are 168 million child labourers around the world today. In 2000 the figure was 78 million higher. The world has come closer to the goal of eliminating child labour.

"The struggle against suppression and for the rights of children and adolescents contributes to the realization of the «fraternity between nations» that Alfred Nobel mentions in his will as one of the criteria for the Nobel Peace Prize."

Malala was hotly tipped last year to win the prize.

The Argentine head of the Catholic Church was not voted by the Nobel commitee this year, nor was US whistleblower Snowden. They were among a record number of 278 nominees. The full list was kept a secret.