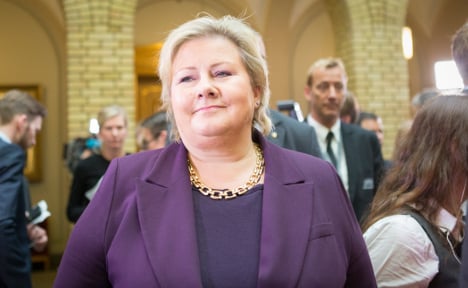 Past protocol has seen the Prime Minister walk out to the Royal Palace Plaza (Slottsplassen) in Oslo, a few minutes after the prize winner is announced.

Yet some critics want to see the tradition gone. Sverre Lodgaard, a member of the Nobel Committee, believes Solberg should end the tradition of the Norwegian Prime Minister being among the first to congratulate the Peace Prize winner.

The Norsk Utenrikspolitisk Institutt researcher (NUPI – Norwegian Institute of International Affairs) argues that the practice has made it difficult for other nations to see the Nobel Committee is independent from the Norwegian government.
Solberg has said she believes there are arguments both for and against keeping the Norwegian leader's speech. She concludes it correct to follow tradition.
“It is natural to congratulate the Peace Prize winner. There's a tradition for it,” Solberg said to NTB. She also defended her right to comment on any event she felt appropriate.
She added: “We don't know yet who will win the prize, so we'll see after the award is announced what the comment will be.”
Lodgaard views the traditional comment will result in the Nobel committee and Norwegian authorities being seen as one. China, for example, reacted strongly against the Norwegian government  in protest against the Nobel's Peace Prize being awarded to dissident Liu Xiaobo in 2010.
“My point is that it is important to create a distance between the Norwegian authorities and the Nobel committee if the prize is to be perceived as completely independent from Norway's stance in foreign affairs politics,” said Lodgaard.
The Prime Minister of Norway said in further defence: “Most important is that Nobel is an independent committee. Neither the government nor the parliament has anything to do with who receives the prize. We also don't know in advance who will receive it. It is natural that I comment on the Peace Prize, the same way I commented on the Nobel Prize in medicine earlier this week.”
On Thursday, the French author, Patrick Modiano, won the Nobel Prize for literature. The surprise result, announced in Stockholm, saw the 69-year-old beat favourites Japanese writer Haruki Murakami and Kenyan novelist, poet and playwright Ngugi wa Thiong'o.
Modiano is described by the Nobel Academy as the "Marcel Proust of his time" and many themes from his 25-odd novels include loss, memories, identity and guilt, with connection to WWII and the Nazi occupation of France.