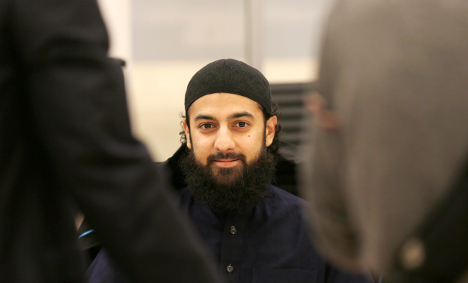 Ubaydullah Hussain appearing in Oslo court. Photo: Vidar Ruud / NTB scanpix
Hussain had been charged for breaking Norwegian law, paragraph 147c, which refers to the encouragement of terror within society.

The background to the case is that Hussain celebrated terror attacks on Facebook at on four different occasions. In addition, he posted a picture of convicted terrorists. He himself claims that his statements are protected by the Freedom of Speech act.
The penalty sentence is hardly ever used in Norway, and this case is considered an important landmark ruling on the differentiation between freedom of speech and threats.
The prosecutor had earlier said he would not exclude the case may be taken up to a higher judicial level, possibly all the way to the supreme court.
Fari also proposed ten months in prison for Hussain when the case went to the district court last week. Fari believes that Hussain understood very well that some would interpret his glorification of terror as an encouragement to kill.

The 29-year-old Norwegian citizen smiled when the sentence was read aloud and, after the court was adjourned, Hussain said: “I'm not surprised. I've operated within the freedom of speech.”

“This is just another attempt from PST and the prosecution to frame me,” he said.
Hussain added he doesn't relate to Norway's “political, secular laws” but only the laws of Allah.
There has been silence on his Facebook profile lately. Hussain stated that he will not stop posting his opinions in public and does not regret anything of what he already posted.
Hussain said: “I will continue to support my Muslim family.”