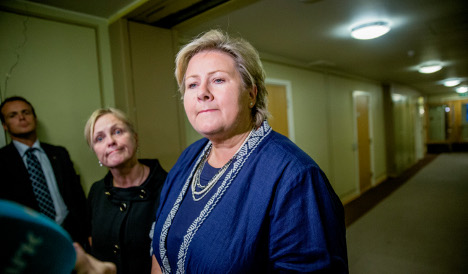 "We've received clear advice and there is no reason not to follow the advice. A big project like this, which is so expensive, requires broad popular support and there isn't enough support for it."
Erna Solberg, Norway's Prime Minister [Source: BBC]

"First of all, this sends a strong signal to the International Olympic Committee that there is more need for sobriety and public know-how at future Olympics arrangements. The decision for Oslo now frees up more money for transport, health and sports in general. I've said the whole time that all [political] parties must be allowed to make their own decisions. But we also see that the discussions have been about a lot of the same [things], a development that grew completely out of proportions. We in FrP are also happy to watch our sports heroes, and the people is still proud of our sports heroes, but shake their heads over the pompousness."
Siv Jensen, Minister of Finance and leader of Progress Party (FrP – Fremskrittspartiet) [Source: NTB]

"The way the application was received now, I think it will take a decade before Norway has the opportunity to begin thinking of a new application for the Olympics."
Johann Olav Koss, Norwegian skating champion [Source: NTB/NRK]

"IOC is now in a situation where everything may go very wrong. When democratic, rich countries such as Norway says 'no' to stage the Olympics because of the corruption and pompousness of IOC, it is like a missile in the hull of the organization. Several voices, both Norwegian and international, believe the solution is to forget IOC and start again from the beginning."
Jarle Aabø, reputation expert
[Source: NTB]

"The Conservative Party has had the power over Oslo for 18 years and they didn't manage to convince their own government. They have spent 200 million kroner without even having made a reality check of the application. I'm surprised that the head of the city council of Oslo trivialises the whole issue. This shows that they have no say in their own government. The [Oslo] city council has demonstrated their own inadequacy."
Raymond Johansen, party secretary, Labour Party (Arbeiderpartiet) [Source: NTB]

"A reasonable decision, because it was obviously not a good enough atmosphere among the people. But I'm also surprised, because this has been a prestigious project for the Conservative Party."
Audun Lysbakken, chairman of Norway's Socialist Left Party (Sosialistisk Venstreparti) [Source: NTB]

"A Norwegian 'no' to the Olympics in Oslo in 2022 is the clearest signal Norway could send to IOC. That the winter sports nation Norway, where many have good memories from the Olympics in Lillehammer in '94, chooses to say 'no', I think is due to the escalating demands of the Olympics arrangers in the last years and the debate of special privileges to the leadership in IOC."
Trygve Slagsvold Vedum, chairman of Norway's Centre Party (Senterpartiet) [Source: NTB]

"I'm very surprised by the 'no' from the Conservative Party, that they stopped just before the finishing line."
Rigmor Aasrud, MP, Norway's Labour Party (Ap) [Source: NTB]

"I think Norway and Oslo could have made the best Olympics of all times … A great party for the people, something we have been missing from the last Winter Olympics."
Ole Einar Bjørndalen, biathlon star
[Source: NTB/VG]

"I think it is disappointing for Norwegian sports. At the same time, the days will be calmer ahead and I may focus on other, important tasks for the athletics.The most important thing this can give athletics is the fact that Oslo municipality has now promised that they will build the planned Olympics facilities anyway. It will take more time, but they will be built, and I think this is very good news. The special associations [of Norwegian athletics] recently pointed at Oslo, because they miss facilities there. So if one gets these facilities, it will be a very good reward for the process."
Børre Rognlien, Norwegian sports official and MP for Conservative Party [Source: NTB]