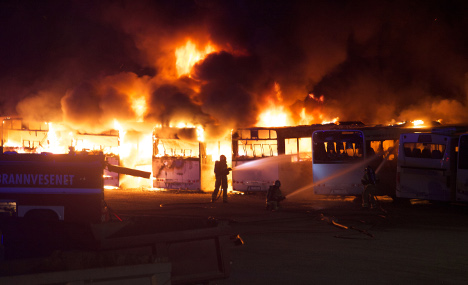 The fire started in the town of Stokke at the Borgeskogen industrial estate.

Emergency crews received a call alerting them to the fire at 12.50am on Tuesday morning.
Jens Petter Bærland of Vestfold police said to NTB: “The buses were all alight.”
It took fire fighters several hours to put out the fire and the blaze was under control by around 2am on Tuesday.
Mechanics working overtime at a workshop nearby discovered  and reported the fire, said VG.
13 Unibuss coaches were completely destroyed. Head of operations at Unibuss Vestfold, Jack Larsen, said: “They heard a bang, then saw the flames. By then it was already too late. I was met by a gigantic bonfire. The fire department did whatever they could, but the only thing that could be done was to contain the fire as much as possible.”
Unibuss worked through the night to minimize disruption for travellers in the Vestfold area for the rest of the week.
Larsen says: “Luckily the autumn leave [for all students and pupils] is this week, so we got less traffic than usual. We hope traffic will go as normal on Tuesday.”
Larsen says that one new bus costs around 2 million kroner ($315,000)  so it will cost a total of 25 million kroner to replace the lost fleet.
The reason for the fire is not known yet.