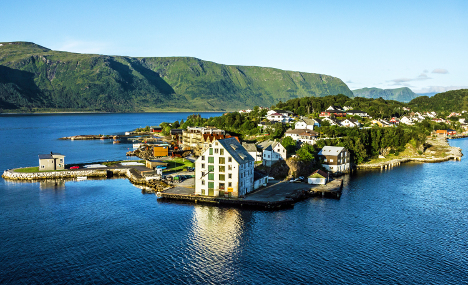 The incident happened on Tuesday morning at around 8am at the Tine dairy in Ålesund.

Nine people were exposed to the potentially deadly gas and brought to a local hospital.

The leakage was discovered at 8am by dairy staff and emergency services quickly cleared several streets in the centre of Ålesund. The main road in to the city centre was also closed off. A sanitation tent was put up by the fire department to clean anybody exposed to the ammonia.
Several people were exposed to the gas leak that came from a compressor room after maintenance work. Two people were directly exposed to the gas in its liquid form, while seven others were exposed to the gas from the leakage.
Police chief Jon Kåre Flo said to NTB: “Those exposed to the gas were cleaned on site and are now being taken care of by health personnel.”
Local police reported at 9am: “The nine are sent to Ålesund hospital for a health check. The evacuation is still in place. Sanitation of the area is on-going.”
The leak caused traffic jams in Ålesund after road blocks were put in place around the city. The wind direction was however advantageous to the clean-up operation and the colourless gas was soon blown over a nearby fjord, confirmed police.
At 8.30am police reported the leak had stopped, but the evacuation and the road block of the town centre's streets was maintained as a precaution. Just before 10am on Tuesday, the road blocks were removed and traffic could move again as normal.
Tine dairy in Ålesund contains the dessert factory of Tine and is a special facility for ultra-pasteurised products such as creams, ice coffee and puddings. The facility processes 18.6 million litres milk per year, states the company’s website. Ammonia is normally used for cooling and freezing dairy products.