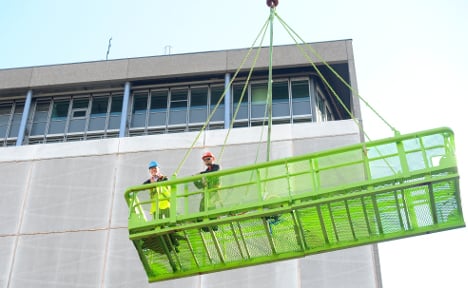 The project will be the largest and most expensive of its kind in Norway's history and the Minister of Local Government Jan Tore Sanner was on site to celebrate the start of the first phase of the ambitious project: the demolition and rebuilding of S-block.

Sanner said: “The new government headquarters will be more modern. We will create lively and safe city spaces and a good locality for working.”
On Wednesday experts will tear down S-block, the first of the government buildings to be removed. This job will finish during the coming winter.
The outside areas of the government headquarters will be used as places to pass for pedestrians and cyclists. Tourists will also be allowed to visit the site and see the work in progress.
The plans of the project include maintaining the High Block (Høyblokka) and the open space towards Akersgata street as is. During the construction work period, a new passage will be opened up through the reception of the High Block, a passage that will function as a by-pass.
“The High Block is an important part of our history that we will bring into the future. When we open up the High Block for people to pass through, it will serve also as a nice celebration of openness," said Sanner.
The Norwegian government also made the decision to build an information centre about the July 22nd 2011 attack of the government headquarters. This move is supported by both the Worker’s Youth League (AUF – Arbeidernes Undomsfylking) and the national support group following the atrocity committed by Anders Behring Breivik.
Sanner said: “Here we can bring further information as to what happened in 2011 and what went on in the government headquarters.”
During the autumn work will begin on deciding how the new government headquarters will look. In spring of this year, the Norwegian government decided that the Y-block, R4 and the S-block will be torn down, while the High Block will be preserved.
Now sees the start of the concept and ideas phase for what is going to be the biggest construction work project ever in Norway. Last week Statsbygg (the Norwegian government’s real estate management agency) advertised for bids, and is seeking four to seven groups to come up with ideas.
Hege Njaa Aschim, director of communication at Statsbygg, said: “It could be architects, city planners or others who have competence in the field. We are looking for creativity. We have, for example, hopes of maybe getting younger, not yet established architects onto the team.”
In December it will be revealed who is chosen. These groups will then get the winter to crystallize their ideas. In May next year, the suggestions will be exhibited to the public in Oslo.
There will be no election of a "winner" during the idea phase. Instead, the Norwegian government will be free to use all the ideas as part of the project.
Jan Tore Sanner said: “In such a big project as the government headquarters, we need a wider acquisition of ideas on how the government headquarters will look, and how the city spaces are going to be formed. The suggestions will be exhibited, so that we get a good debate on the best look for the new headquarters.”