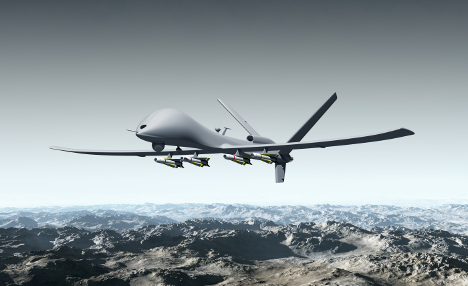 Illustration of a combat drone flying over barren mountains: Shutterstock

Professor Christof Heyns asked Norway on Thursday to challenge its allies on the US’s use of armed drones which Heyns states violates international law and will, in the long run, make the world become a more dangerous place, reported NTB.

Heyns, who normally investigates and reports to the UN on extra-judicial and illegal executions, said: “The world listens to the voice of Norway for it is often the voice of reason.”
The professor thinks Norway should bring the case to a human rights council of the UN and the general assembly.
The issue of the US’s drone attacks was the subject of a seminar in the Norwegian parliament on Thursday. The debate was raised by spokesperson for foreign affairs, Bård Vegar Solhjell.
Solhjell said during the debate: “This is perhaps the greatest and most dangerous development of warfare in the world today, but it has not raised much political debate.”
He argued that drones make it easier and more cost-effective to wage an attack and put soldiers’ lives in little or no danger.
A new Norwegian documentary “Drone”, directed by Tonje H. Schei, has its Norway première at the film festival in Bergen on Friday, but a special première was shown at the Norwegian parliament on Thursday.
In the documentary two drone pilots, Brandon Bryant and Michael Haas, report from inside the American drone program, where killing is akin to playing computer games.
While the US claim their drones are used in precise, targeted attacks against terrorists posing a threat against Americans, human rights lawyers claim that many of the killed are innocent civilians. The dead also do not get a chance to defend themselves against the allegations that cost them their lives.
Bryant has killed 13 people with drones, but said he cannot be sure about who he hit. The first drone attack he made hit a group of people walking along a road, armed with rifles. Another time, it was electronic signals indicating that a suspect was in the house that was attacked.
It was the hunt for the American Anwar al-Awlaki, a suspected al-Qaida leader, in Yemen, that made Bryant question drone attacks. He was confronted with the question whether the execution of Awlaki was according to the Constitution.
Bryant said to NTB: “To be honest, I didn't know what the Constitution was, even though I took an oath upon it. I went home, read it and then saw that we had violated the rights of an American citizen.”
Bryant hoped that other drone pilots would follow his example of when he came out to the US media two years ago. But instead he was called a traitor, received threats and friends turned their backs against him.
UN advisor Heyns believes international law and the rules for warfare and human rights are good enough for a global society today. He argues there is no need for new rules, even though the weapon is new. He concludes: “It is the [human] violation [of the law] that is the problem.”
“One can only point out the violations of international law if one knows the facts. It is understandable that some countries don't want this case on the table, but it’s important that countries like Norway say: 'We need to discuss this',” said Heyns.
Spokesperson of foreign affairs, Bård Vegar Solhjell thinks the use of armed drones challenges what he calls two of the greatest successes of modern times: international law and the human rights.
Solhjell said: “What if Russia and China in future use drones like the US does today, inside other countries where there are people they wish to fight against? What if groups like Isis get armed drones? We have to expect this will happen.”
Facts about Drones
[Source: NTB]