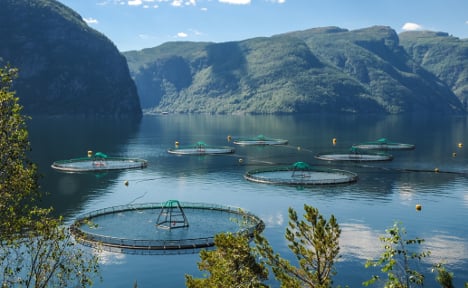 Cermaq and Mitsubishi Corporation will become the world's second largest salmon farming company. Photo: A salmon farm in a fjord in Norway Shutterstock

The Japanese group has offered to pay 8.88 billion Norwegian kroner ($1.4 billion) for the entire share capital of semi-state-owned Cermaq.

The Norwegian state, which owns 59.17 percent of Cermaq, said it was prepared to sell its shares but reserved the right to sell to another bidder should a "more attractive" offer emerge.

Cermaq's management recommended investors accept the Mitsubishi offer, which at 96 kroner per share was 14 percent above Friday's closing price and 18 percent above the average share price over the past three months.

"The offer recognises the financial and strategic value of Cermaq and delivers an attractive offer premium to the shareholders," Rebekka Glasser Herlofsen, chairwoman of Cermaq's board of directors, said in a statement.

Mitsubishi said it hoped in November to close the purchase of Cermaq which would complement its existing food businesses, in particular its seafood business which enjoys a strong position in Japan.

With the purchase Mitsubishi Corporation "will combine the production know-how, business foundation accumulated in the food sector with Cermaq's scale and sector expertise to expand globally in the seafood business and, in so doing, contribute to securing a safe and sustainable food supply network," it said in a statement on its website.

In 2013, the world's largest salmon producer, Norway's Marine Harvest, made a failed attempt to take over its competitor Cermaq.

In recent months Cermaq has faced several challenges and issued Monday a profit warning for the third quarter which it said was due to falling prices caused by Russian trade bans in retaliation for EU and Norwegian sanctions linked to the Ukraine conflict.

The company's sales projection for 2014 fell from 158,000 to 151,000 tonnes partly due to the Russian embargo, as well as a disease affecting its fish farms in Chile and warmer temperatures in northern Norway which have slowed fish growth.

Kolbjoern Giskeoedegaard, an analyst at Nordea Markets, said the sale was likely to succeed.

"It's a good offer," he told AFP. "It's always possible that another player will express an interest but at this price, I think it's unlikely."