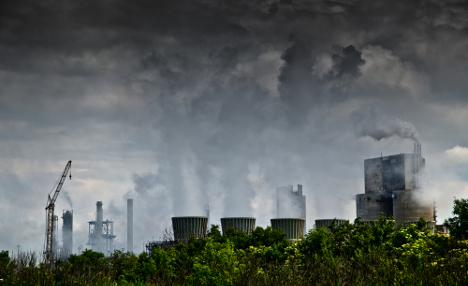 A report by the Global Carbon Project (GCP), published two days ahead of the UN climate summit on Tuesday, found that carbon dioxide (CO2) emissions from fossil-fuel combustion and cement production grew by 2.3 percent in 2013, reaching a record 36 billion tonnes of CO2. It predicted a further 2.5 percent increase in 2014.

It means that the world's "carbon quota" is fast being used up, according to the GCP research. Like an allowance, the quota is the maximum of heat-trapping gas that can be emitted before warming breaches 2°C as compared to the start of the Industrial Revolution in 1750.

"With current emission rates. the remaining 'quota' to surpass 2°C of global warming will be used up in around 30 years — or one generation," its authors said.  "Total future CO2 emissions cannot exceed 1,200 billion tonnes for a likely — 66 percent — chance of keeping average global warming under 2°C since pre-industrial times."

"Globally emissions would need sustained and unprecedented reductions of around seven percent per year for a likely chance to stay within the quota," warned Glen Peters of Norway's Centre for International Climate and Environmental Research in Oslo (CICERO).

"If this were a bank statement it would say our credit is running out," Dave Reay, a professor at the University of Edinburgh in Scotland, said in a commentary. "We've already burned through two-thirds of our global carbon allowance and avoiding dangerous climate change now  requires some very difficult choices."

Tuesday's summit in New York aims at giving a political push to meeting the UN target on climate change.

Member states have agreed to limit global warming to 2°C above pre-industrial levels, although they have not set a date by which this should be achieved.

The negotiations are supposed to climax in Paris at the end of 2015, providing a global pact that should come into force in 2020. But the talks are complex and bitterly-fought, with divisions over who should shoulder the burden of curbing the emissions.

Although the 2°C goal is aimed at preventing "dangerous" climate change, scientists are cautious about endorsing it, saying the figure is no guarantee of avoiding damage to weather systems, amplifying such problems as drought, floods and storms and loss of land from rising seas.

The report said most of the world's largest carbon emitters last year continued their upward curve.

China, which has been the world's top emitter since 2006, increased its CO2 emissions by 4.2 percent in 2013, while those of the United States and India grew by 2.9 and 5.1 percent respectively.

Only one of the main emitters, the European Union (EU), managed to reduce its figures last year, achieving a reduction of 1.8 percent due mostly to a weak economy and despite a rise in coal consumption by Finland, Germany and Poland.

China is responsible for 28 percent of all CO2 emissions, followed by the US (14 percent) and Europe (10 percent), according to the GCP analysis.

"China now emits more than the US and EU combined and has CO2 emissions per person 45 percent higher than the global average, exceeding even the EU average," said Robbie Andrew at CICERO.

"This is an interesting trend and shows the important role China will play in addressing the climate challenge," said Sybil Seitzinger, director of the International Geosphere-Biosphere Programme (IGBP), based in Stockholm.