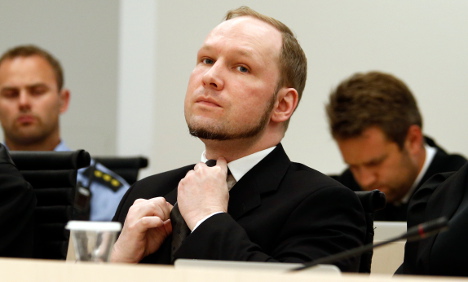 In a letter the 35-year-old mass killer sent to his father from jail, Breivik wrote that his father must reject his social democratic ideology and instead join what he calls the Norwegian fascist movement, reported VG.

Sources who know the letter's contents told the newspaper, if Breivik's father does not obey his son's demands, Anders Behring Breivik will resist having any more contact with him.
The letters that Breivik and his father have sent to each other will, according to what VG learned, be reproduced in the new book “Min skyld? En fars historie” (“My fault? A Father's Story”), that Breivik's father wrote together with a ghostwriter. The book is due to come out this Thursday.
Readers will for the first time understand Jens Breivik's own story, according to Juritzen publishing who will sell the book.
Breivik's father writes in his book: “I feel guilt. And I feel responsibility. What if I had been a better father? Would Anders then have done what he did?”
Jens Breivik said to VG: “Of course I don't look forward so much to the book coming out. But I think this book is necessary. It is something I had to do.”
Jens Breivik is expected to make guest appearances to promote the book, said VG.