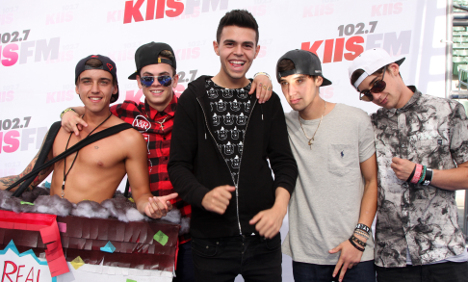 Fans swarmed into Oslo's Parkteateret venue to watch the comedy group play at the weekend.

Norwegian police warned the band they would face arrest if he did not try and control the crowd. As the situation got more out of control, officers arrested frontman Yammouni.

Fans were able to follow the incident live via Twitter as Yammouni tweeted during the chaos. He even cheekily gave a countdown to his arrest.

Yammouni spent only a few hours in police custody before he was released on Sunday night. Yet it was enough to prompt a social media furore from fans who could follow the whole incident on Twitter, reported music website ClickMusic.
The singer was not charged after he claimed he talked his way out of jail with Norwegian police. The Janoskians hail from Melbourne, Australia and their success first broke on YouTube. Apart from their music, the band is known for releasing videos of stunts and pranks they play on unsuspecting members of the public.
The group often raise controversy for their lewd behaviour and over the top pranks, yet have a loyal following of fans who are known as "Janoskianators".