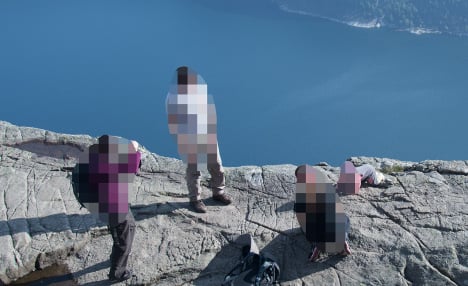 This baby faced a drop of 600 meters while crawling on the edge of Pulpit Rock in Ryfylke. Photo: Fred Sirevåg / NTB scanpix

The man who took the picture was upset as he saw the shocking family scene on his way up the Preikestolen (The Pulpit Rock) in Forsand, South Norway. He witnessed the baby's parents and family photographing the baby crawling along the edge of a steep cliff with a drop of over 600 metres.

The hillwalker Fred Sirevåg, who was enjoying a walk up to the famous Norwegian plateau and viewpoint, said to NTB: “They let the baby crawl near the edge and they even walked back a few steps so that they could take pictures of the baby with Preikestolen in the background.”
Sirevåg was sitting at a safe distance from the edge of the cliff and took a picture of the incidence on a mountain ledge.
He said: “I think it was very creepy. The baby could have fallen in any direction. I think it was very irresponsible.”
General manager of Stavanger Turistforening (Stavanger Tourist Association), Preben Falck, encouraged people to be careful on their trip to Preikestolen.
Falck said: “I have taken my children to Preikestolen and kept them at a safe distance away from the edge. All parents are different, but I wouldn't look after my children like that.”
He added: “We cannot put up signs telling that parents should not put their children down near the edge. Nor do I think we should put up fences and secure the area. That would spoil the experience.”
The Pulpit Rock is the most famous tourist attraction in Ryfylke, Southern Norway. It is 604 metres above the Lysefjord and is a flat mountain plateau, around 600 square metres. The plateau was historically known as Hyvlatånnå ("planed tooth").