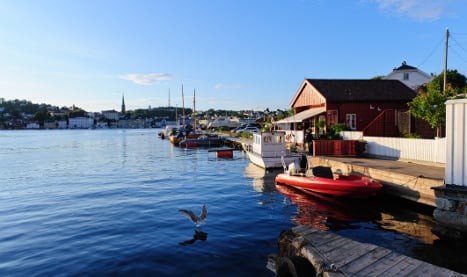 A girl was attacked by her parents in Arendal for calling out the Devil's name. Photo: Shutterstock

The two people, from the Aust-Agder region in South Norway, were charged for repeated acts of violence against their three-year-old girl. The physical punishments consisted of flicking and pinching on her hand and face to reprimand her for, among other things, calling out the name "Satan".

At the trial of the parents last week, the mother of the abused child claimed she was deeply religious and reacted to her daughter after the child shouted “Satan” during a tantrum.

The father was accused of holding his daughter down into her bed when she refused to go to sleep.

However, the district court of Arendal decided the maltreatment of the girl by her parents was serious enough to make a penal case. After a trial, the couple were both sentenced and jailed for 30 days and given a fine of 5,000 kroner ($785).

The court ruled that none of the acts can in themselves be seen as serious violence, but that the emphasis was on it being violence against a small child.
The two charged admitted most of the acts they stood accused of.
The woman said to Agderposten before last week's trial: “Of course it was wrong of me to flick my daughter on her hand.”
The woman believed there are many parents who should be charged for abusing their children if the court would decide they did anything criminal. Aust-Agder district court came to exactly that conclusion.
The case began after the local kindergarten where the daughter attended called the Child Protection Services with concern for the girls' welfare. The police were then notifed.
Child psychologist, Unni M. Heltne, said to NRK last week: “Afflicting pain onto children is never all right.”
The case raised controversy among the judges as two of the judges felt a penalty on probation would be sufficient punishment. The Arendal court had to consider two previous Supreme Court cases to decide what was adequate punishment for the parents based on the level of violence administered to the girl.
Of one of the rulings from March 2011, it was adjudged parents are allowed to give their children “a careful slap”. This was announced after a case where a stepfather was sentenced after slapping two boys on their rears with his flat hand. The Supreme Court concluded this act was above the limit of what is lawful. The man was fined 6,000 kroner ($940).
The second ruling was a decision from Supreme Court in 2014, that any use of violence that is not intended to prevent danger will be penalized. Physical punishment, when raising children is deemed illegal.