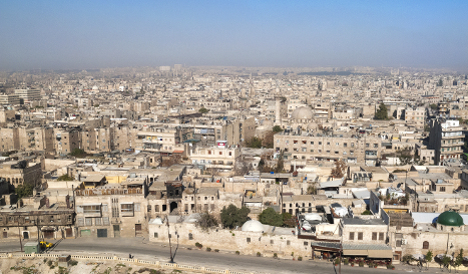 The father of five forced his wife and children to travel to Syria. Photo: Shutterstock

The 35-year-old of Syrian origin told his wife he was taking the kids for a holiday in Turkey, but his wife soon learned he had taken the children over the border into Syria against their will.

The father from the North of Norway was arrested on Saturday and charged for keeping his family hostage. He arrived back in Norway with his wife and five children from Syria this weekend.

The five children landed back in Oslo Gardermoen airport after having been taken to war-torn Syria for one month. Their mother believed they were set for a vacation in Turkey, but against her and her children’s will, they were brought from Turkey past the border to Syria.
During their forced stay in Syria, the woman and her five children were kept with armed guards, while their father fought in the civil war in the Middle Eastern country.
On his way in to Oslo, the father was arrested by Norwegian police and separated from his family. His wife and his children, aged between one and eight-years-old, were heavily traumatized from the incident. All are now under the care and supervision of the Norwegian healthcare authority.
Vidar Helgheim, the victims' lawyer, said to NTB: “They were forced against their own will to go into a war zone. It is an extreme situation that it is difficult to fathom. These children feared for their lives.”
On request from family members in Norway, Helgheim agreed to report the case to the police on August 6th. Since then, attempts were made to get the mother and her children out of Syria.
The family father is described by Helgheim as an Islamic extremist. It is unclear whether the arrested man has or had intentions of joining one of the terrorist groups in Syria, the Islamic State (IS) or Al-Nusra, reported Dagbladet.
The man was earlier this year sentenced for two years of prison connected with a drug case earlier this year, said TV2. The trip to Turkey took place while he was waiting to serve his prison term.
The Norwegian police and the Ministry of Foreign Affairs (Utenriksdepartementet – UD) worked on the case, but could not send personnel to Syria. The family of the five underage children crossed the border between Syria and Turkey themselves on their way home to Norway.
The Ministry of Foreign Affairs refused to comment the case to NTB. Kripos (Kriminalpolitisentralen – National Criminal Investigation Service Norway) stated it is not their case.
PST (Politiets Sikkerhetstjeneste – Norwegian Police Security Service) were informed of the case, but could not comment on information as of Sunday evening. If the charge against the father in the case is extended from infringement of personal liberty to also partaking in terror actions abroad, then PST will also become involved in the case.
NTB reported Troms police is now handling the case.