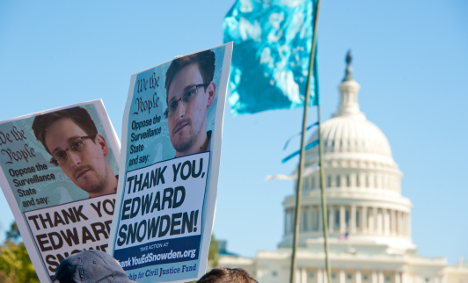 Signs held by protesters during a rally against mass surveillance in Washington in 2013. Photo: Shutterstock

MP Michael Tetzschner of the Conservative Party believes that if the American whistle-blower Edward Snowden receives the Nobel Peace Prize in December this year, then Norwegian police could and should arrest him if he comes to Norway.

Snowden has been nominated for the Peace Prize amid growing support for him to receive the award this year.
The whistle-blower has been granted asylum in Russia, but the US wants him arrested and extradited.
Hardline Tetzschner said he made no distinction between a Nobel Peace Prize winner and any other wanted American citizen.
Tetzschner said to Dagbladet: “Norway needs to respect the agreements that we have signed.”
By international law, a valid warrant from the US means Norway has a duty to arrest Snowden if he arrives in the country.
Director of PRIO (Peace Research Institute Oslo), Kristian Berg Harpviken, agreed with Tetzschner that by law, Norway probably would not have any other choice but to arrest Snowden.
Harpviken said to Dagbladet : “I don't think [Snowden] will get the prize this year due to these problematic matters.”