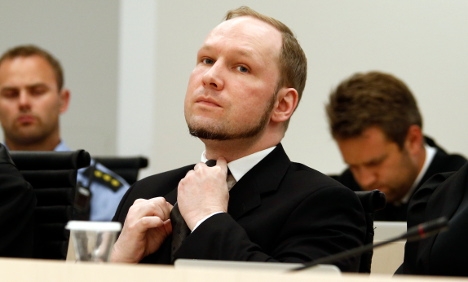 In a 34-page letter, received Friday by AFP, the right wing extremist issued an "ultimatum" to the Norwegian justice ministry, demanding the removal of what he described as barriers to the creation of the "Norwegian Fascist Party" (NFP) and the "Nordic League" (NL).

On July 22, 2011, Breivik, now aged 35, killed 77 people, claiming that he was fighting against multiculturalism and a "Muslim invasion".

He began by detonating a bomb near government buildings in Oslo, killing eight people, and later opened fire on a Labour Party youth camp on the island of Utøya, taking 69 lives, most of them teenagers.

Breivik claimed to have "converted" to democracy since being sentenced to prison in August 2012 and said he wanted to establish a political party to promote his ideology without having to resort to violence.

He added that he had been inspired by the electoral success of the neo-Nazi Golden Dawn party in Greece.

"As a former militant, my heart weeps for the barbarism that I perpetrated on July 22," he wrote from prison where he is serving a 21-year sentence, which may be extended.

"As a former militant, the most important thing in my life is to work towards preventing something like this from ever happening again. The whole intention of the NFP and the NL is that this does not happen again," he wrote, signing the letter "Anders Behring Breivik, party secretary and parliamentary candidate for the NFP and the NL".

He said he chose the word "fascist" for the party to avoid being branded a "Nazi".

"Since we will be demonised anyway, it is tactically justified to embrace it," he wrote.

It was not the first time Breivik has attempted to speak to the outside world from his prison cell.

He has written to the media about his ideological convictions on several occasions and had complained about his prison conditions.

While his writings receive little attention in Norway — where most want to leave the Breivik chapter behind — they attract some interest abroad where people were stunned by the brutal atrocity in a country considered to be among the most peaceful in the world.

"It's unbelievable," a group supporting relatives of Breivik's victims wrote on Twitter Friday. "What he writes is full of contradictions."

In February, AFP received another letter where Breivik threatened to go on hunger strike if prison authorities did not meet 12 demands, including a new PlayStation 3 to replace the PlayStation 2 he used in prison.

Around the same time a complaint he made regarding alleged "serious torture", notably his almost complete isolation from other prisoners, was rejected by Norwegian police.

During his trial in 2012 the biggest issue was whether or not he was mentally ill as expert psychiatrists disagreed in their conclusions.

However the Oslo court ruled that he was criminally sane at the time of the massacre and condemned him to the maximum sentence.

All prisoners in Norway maintain their civic rights regardless of the severity of their sentence, theoretically allowing Breivik to pursue his political interests.

"Nothing in our regulation prevents the creation of a party. He has every right as long as he meets the requirements," Andreas Skulber, a senior official at the Norwegian justice ministry told AFP.

However Breivik claims that in practise prison authorities have restricted his rights by stopping letters he sent to gather signatures to register his political parties.

According to the terms of his so-called "ultimatum," Breivik has given Justice Minister Anders Anundsen 30 days to help remove obstacles to his parties being registered, after which time he threatens to take the matter to court.

The prison authorities deny that they have stood in the way of him registering parties, replying that they have only legitimately censored letters which could incite criminal acts.

"This is absolutely not a deliberate attempt to delay things in order to prevent him from creating a party," Karl Hillesland, acting director of Skien prison told AFP.

"But we have a regulatory framework that we try our best to implement."