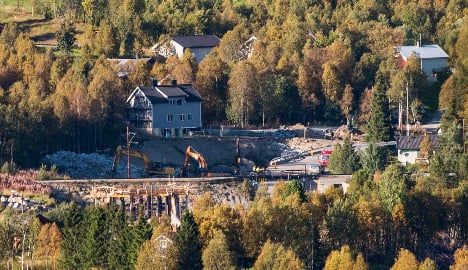 The closed-off National road 7 at Geilo after three died in a demolition accident on Wednesday. Photo: Fredrik Varfjell / NTB scanpix.

Two demolition experts from the Norwegian Directorate for Civil Protection (DSB) have worked with police to uncover what happened in Geilo. Three people died and two other men were hurt in the accident.

Siri Hagehaugen, head of department at DSB, said to NTB: “The work of the experts on the scene of the accident is now finished. We have found the cause of what went wrong.”
The evaluation of DSB has now been given to the police.
Hagehaugen added: “We will continue assisting police in connection with the accident investigation. Any further questions must be directed to the police.”
A drilling rod splintered and got in touch with dynamite on the ground causing the explosion, NRK claimed on Friday.
There was live explosives on the site after the accident. The whole area within a radius of 400 meters was closed off until the site was secured from further risk of damage. On Friday police conducted a controlled explosion of 18 kilos of dynamite at the scene of the accident in Geilo.
Police chief Kai Gudbrandsen said to NTB: “The explosion is now done. Everything went as planned.”
Experts are certain there will be no futher risk of explosion. Both the train line and national road 7 are now open as normal.
Nearby houses, damaged in the blast, will remain uninhabited. Residents whose homes were not damaged in the accident, but were in the closed-off area, have been allowed to move back.
On Friday, a drilling rig was removed from the site. In addition, the Norwegian Labour Inspection Authority conducted their own investigation of the accident.
The Geilo blast is the first involving deaths since 2005. At that time, a 50 year old man lost his life when a charge went off too early during demolition work in Stoa, Arendal.