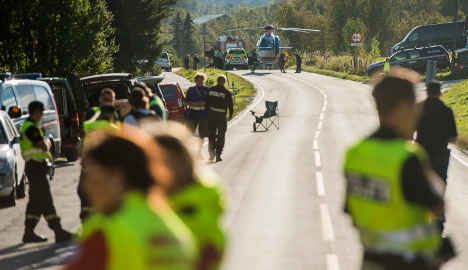 Police establish a no-fly zone over Geilo on Wednesday in the aftermath of a dynamite explosion in which two were killed. Photo: Fredrik Varfjell / NTB scanpix

The explosion occurred in the centre of the town in south-east Norway after an accident during construction work on a new railway link on Wednesday. Bomb crews are currently working to secure the area.

A no-fly zone was put in place over the town of Geilo following the fatal explosion in which three Norwegians died and several were injured on Wednesday.

Police have confirmed the three dead are Norwegians who were working at the site. No information on the deceased will be released until their next to kin are notified.

Three others were injured and one is in a serious condition.

Police are unable to enter the area until the area is secure.

Construction workers were using explosives during demolition work to build a new railway underpass on the national road 7.

It is thought explosives went off accidentally. An explosives expert is currently on his way to Geilo by helicopter to start investigations with police.

The shockwaves at the time of the explosion were so severe, a woman living nearby was injured, said police. Her condition is not critical.

Geilo resident Sverre Isungset said to Hallingdølen: "I have never heard a bang like this before. The whole house was shaking."

All local emergency services were called to the site. Police set up a safety area of 400 meters around the site. Nearby residents in two houses were also evacuated.
Fire chief, Atle Kleivdal, said to NTB: “We have just spoken with police who say that the situation is not yet cleared. We have around 15 men at the site now, but are waiting for orders from the police on what to do next.”
The Norwegian National Rail Administration reports that both national road 7 and the Bergen railway line between Hol and Geilo are closed until further notice.

Geilo in south-east Norway is most famous as a ski resort, popular with tourists. The town has a population of 2,300.