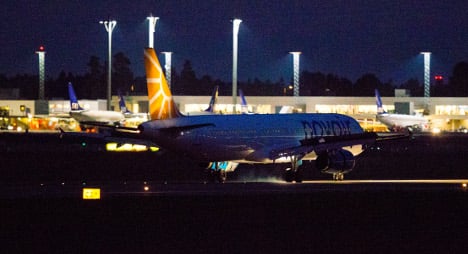 The Novair Airbus A321 emergency landed at 21:15pm, confirmed VG. No one was injured.

The flight crew were instructed as part of normal procedure to circle the skies for three hours to get rid of fuel before making an emergency landing. The airport activated a full alert, said NTB.

Lasse André Vangstein, press officer at Oslo airport, said to NTB after the plane landed: ""It went very well. The plane landed normally without any indications of any errors. It is too early to say whether there really was a puncture or just an [instrument] indication of a puncture."

The flight had mostly Norwegian citizens on board and was scheduled to land in Chania on Crete, Sunday night.

Jane Andersen, mother of 11-year-old old Magnus Skaugerud who aboard the flight to Crete with his father on Sunday evening, said to NTB: "We drove straight to the airport when we heard about the puncture and emergency landing."

Andersen and the rest of her family heard the plane landed safely while on their way to Gardermoen. She said: "It was a relief. Now the only thing I want to do is just give [Magnus] a hug."

Novair will fly all passengers to Chania on Monday morning.