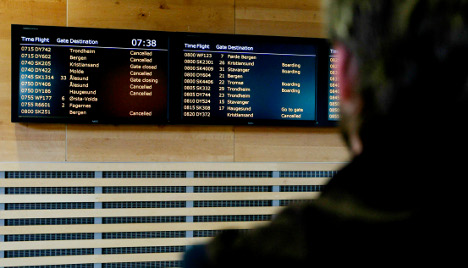 Iceland is currently on red alert in case volcano Bardarbunga erupts over the next few days. Seismic activity caused extremely strong earthquakes over the weekend that caused quakes measuring above 5.0 on the Richter scale. A small eruption also took place under the Dyngjujökull ice cap, the Icelandic Met Office said.

On Sunday, Icelandic authorities registered the most powerful earthquake this far under Bardarbunga after activity increased under the volcano last week. The earthquake measured 5.3 on the Richter scale. On Saturday, Iceland's level of risk was raised to "code red", the highest warning on the country's five-point scale. Several hundred Icelanders were also evacuated from the area over fears of an eruption.

Airspace over the affected area above Iceland was closed, but all Icelandic airports currently remain open. The upgrade has placed all European airlines on alert.

Charlotte Holmbergh Jacobsson, head of communication at Norwegian, said to E24: “The only thing we know up to now is that the situation is upgraded to code red, it is the highest level of danger. But we have the emergency plans ready in case of an eruption.”

SAS also reports that they are more prepared now than they were when the volcano Eyjafjallajökull erupted in 2010. The airline company does not fly its planes over any area where there is risk of an eruption, even if this means longer routes for SAS flights to the US.
Head of press for SAS, Henrik Edstrøm, said: “Until further notice, we follow the situation closely, but we are not flying over the area of a possible outbreak anymore.”
Avinor feels secure that the situation will not be as challenging as 2010, when the term “ash stuck” became a part of people's vocabulary.
Ove Narvesen, director of communications at Avinor, said to DN: “It is difficult to say [anything about the situation in Iceland]. It all depends on how big the eruption will eventually be, how much ash will come out of it, and what kind of ash it is. Everything depends on everything else.”
He added: “But the big difference is that before, one closed off the whole airspace. Now we have a more flexible strategy.”