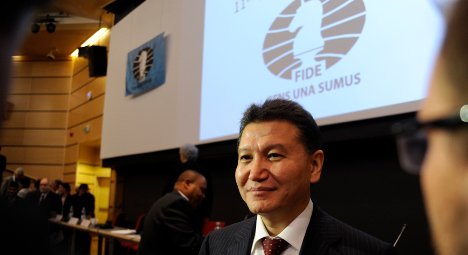 Ilyumzhinov has been president of the World Chess Federation (FIDE) the past 19 years. He was expected to get tough competition to retain his presidency from former chess world champion Garry Kasparov.

But when the votes were counted in Tromsø during the Chess Olympiad on Monday, the result showed a clear victory for the Russian 52-year-old with 110 votes against Kasparov's 61. He begins his 20th term as president with immediate effect.
Ilyumzhinov said to NRK after the result: ”I am proud of this and I will devote my whole life to FIDE. I also want to thank the greatest chess player of all times, Garry Kasparov, for joining.”
Kasparov was disappointed after the loss. He said to NRK: “It is very disappointing. It is a tragedy for chess. I don't think that anything will change. In a few months, the nations that voted for him will realise that they voted for the past, not the future. It's a shame.” Chess champion Garry Kasparov. Photo: Rune Stoltz Bertinussen / NTB scanpix
In the Norwegian chess camp, there had been explicit support for Kasparov in the election campaign. Norway's chess president, Jøran Aulin-Jansson, was also visibly disappointed after the election.
Aulin-Jansson said to NRK: “I am disappointed, I have to admit that. I hoped there could be a chance that Kasparov would win, but when the result came up like this, it is overwhelming for the current president.”
The world's top ranked player, Magnus Carlsen, said: “It is not necessarily good for chess. I guess they have used all tricks possible to win the election. We who play will just have to make the best out of [the situation].”
There was full drama in the voting room at the University of Tromsø during the hours before the election results were called.
Among other things, the two Russian candidates promised more and more money from their own pockets to the FIDE's budget in order to get more nations on their side during the election.
Aulin-Jansson said: “Kirsan [Ilyumzhinov] promised that he would give 20 million dollars to FIDE. Only the most naïve people will believe that it will be on the account tomorrow.”
Kasparov said: “I would like to see proof of the money guarantee of 20 million dollars.”
Also Magnus Carlsen and his manager, Espen Agdestein, expressed their support for Kasparov in his competition against Ilyumzhinov.
The Norwegian chess president said: “The current president and his network have close connections and this makes it difficult for a challenger to win.”