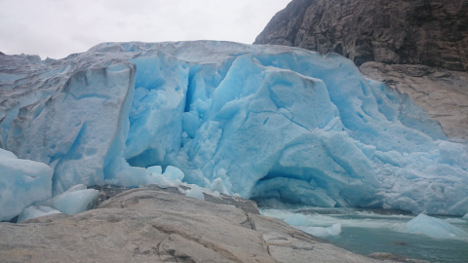 The family took part in an organized glacier tour with around 30 others earlier the same day.

Police spokesman Nils Erik Eggen said to NTB: “After the tour they went back and were then hit by ice as the glacier calved.” Glacial calving is the term used to describe when chunks break off the edge of glaciers.
The dead couple were taken from the scene of the accident.
The couple's two children, who are eight and ten-years-old,  saw the accident, but weren't themselves hurt physically.
The bereaved children are now being looked after by local police.
Sheriff Magne Knudsen Årdal said  to “Bergens Tidende”: “We are now working to  establish contact with the children's family in Germany. At the same time the crisis team of Luster municipality is occupied taking care of the two children.”
The sheriff added the family is understood to have entered an area at the glacier where visible signs warn of danger.
Glacier tour leader Bjørnar Bjørhusdal was quoted in “Fimbul Jostedal”: “I expected this to happen. A lot of people, especially tourists, choose to ignore both the barricades and the warnings.”
The police received a call on the accident at 4pm on Sunday. All the emergency services turned out. An airborne ambulance was sent from Førde and a Sea King helicopter was sent from Florø. In addition, the river rescue group of Sogndal was sent to the site. The search ended at 7.45pm.
Police confirm that no others were hurt when the glacier calved.
A glacier calves when blocks of ice break loose from the glacier itself.
The “Nigardsbreen” glacier is the arm of the “Jostedalsbreen” glacier and is a popular tourist attraction.