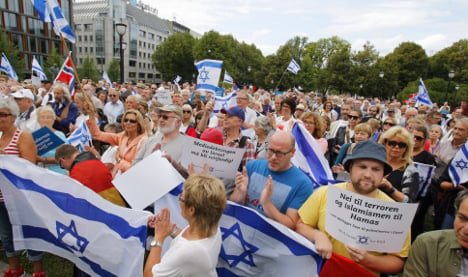 Around 400 people turned out to hear speeches, songs for peace, and stand in solidarity for Israel's right to protect itself from Hamas attacks.

Conrad Myrland, head of MIFF, said just before the start of the event to The Local: "The main goal is to show the Israeli people they have friends in Norway. Currently there are many condemnations of Israel, but there is also a strong pro-Israel community here in Norway. MIFF believe it is right for Israel to defend itself against the terrorism of Hamas. We also ask the Norwegian media to cover Israel in a more objective fashion."

Speeches came from top Norwegian politicians, pro-Israeli activists, and members of MIFF. Many of the speeches attacked biased coverage of the conflict by the media as an obstacle to peace.

Demonstrators carried signs with messages that read: “The media covering of Israel must become more fair” and “It is right and important that Israel defends its inhabitants”.

Anna Krivorutsky, 38, an Israeli tourist visiting Oslo, joined protestors.  She said to The Local: "It's very heartwarming to see Norway's efforts today. We'd been warned Israelis are not popular in Norway right now. I have had no problems during my stay in Norway and have been welcomed by everyone."

Krivorutsky expressed surprise at the high level of police present at the Oslo event. She commented: "We live like this everyday in Israel right now. There are constant  threats to our lives. Today, rockets are coming from Gaza and landing 30km from Tel Aviv. When the bomb alert sounds, I have 60-seconds to run with my children to the bomb shelter."

Police feared a repeat of the 2009 street riots that marred the MIFF demonstration five years ago. This year's event was organised amid high security.

A rival protest group of around 100 people gathered in support of Palestine opposite Parliament Square. There was no trouble until the group raised a Palestinian flag, at which point six police riot vans sped to the scene and lined up in front of the protestors, blocking them from the pro-Israeli group.

Pro-Gaza activist, Alexander, 27, a charity worker from Oslo, said: "Nobody here wants to be violent, just to be heard. But when we raised the Palestinian flag during our protest, the police moved in on us. They think we're animals. They treat us differently from the MIFF supporters. It is an injustice."

Another protestor, Kenneth Arctander, a PhD student in Oslo, was asked by The Local why pro-Israelis were not entitled a voice. He said: "Of course, they can have an opinion. What MIFF are saying is wrong. They is helping send Norwegian civilians to Israel to kill or to die."

According to police, the Palestine Committee of Norway applied to be allowed to hold a counter demonstration against the supporters for Israel, but later withdrew their application.
Committee leader Kathrine Jensen stated to NRK: “If there is any trouble, we will get blamed for it, and we don't want that.”

Police and local businesses were on high security alert ahead of the Oslo protest.

Oslo police chief Finn Belle said to NTB: “We are aware of the possibility of aggressive conditions. We showed up with a great amount of police forces, so that this [demonstration] may proceed legally and orderly.”

Grand Hotel on Karl Johan Gate and close to Parliament Square remained open with a police presence throughout the demonstration. When asked by The Local if they had taken increased security measures, a spokesman for the hotel refused to comment.