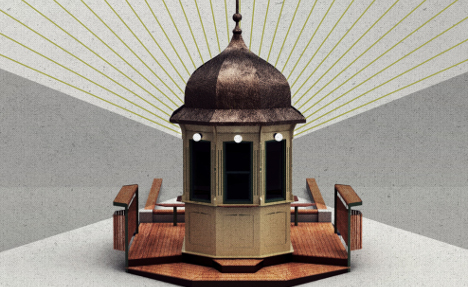 The former news kiosk is located in the center of Tromsø, North Norway. It has transformed itself just in time to catch visitors who are in the city for the Chess Olympiad which also opened on Friday.

The kiosk, a historic city landmark, re-opened in May 2014 as the city’s quirkiest hotdog vendor. It offers a gourmet-style version of Norway’s favourite takeaway food.

But, as of 1st August, the kiosk, known as Raketten (The Rocket), has been transformed into Norway’s most bijou bar.

Floor space may be limited to 3.86 meters-squared inside, but there is room enough for nine seated customers outside.

Gottfried said to The Local: “We are encouraging customers to come and stand like they do in the espresso cafes in Italy, have a quick hot-dog and a beer. What could be more Norwegian?”

There is room for just one beer tap inside the kiosk and Raketten will serve alcohol using an innovative tap system invented in the US and perfectly engineered to pour alcohol fast, especially in small spaces. Raketten is the first Norwegian vendor to use the technology.

The new bar hopes customers can agree small is beautiful and enjoy the quirky space, which will serve food and beverage both day and night.

“We may be Norway’s smallest bar, but customers can expect big things from us,“ said Gottfried.