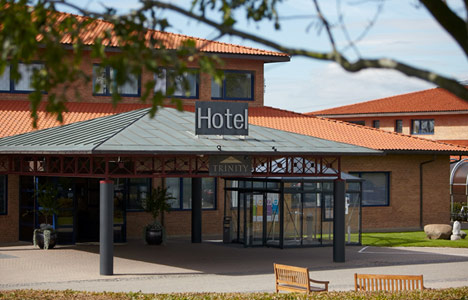 The man was found outside the Trinity Hotel in Fredericia. Photo: Trinity Hotel & Konference Center
A man found digging through a rubbish container outside a Fredericia hotel over the weekend had quite the unusual backstory.
“It turns out that the 44-year-old man is wanted in Norway. Not for anything criminal, but because his family hasn’t seen or heard from him since 2005,” Southeast Jutland Police spokesman Henrik Dam told Jyllands-Posten.
Dam said that the man had apparently been living in a forest near the hotel for at least the past four weeks, but beyond that little was known about his whereabouts for the past nine years.
“We couldn’t get him to tell us why he left home or where he has been since,” he said.
But after nine years away, the man apparently had a change of heart. He told police that he wanted to go back to his family and was placed on a Norway-bound ferry on Saturday afternoon.