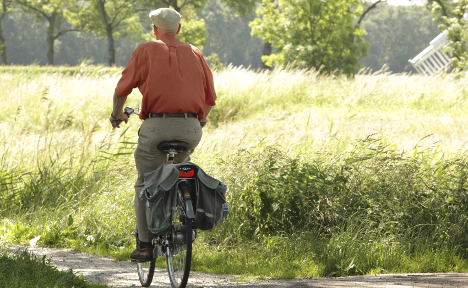 82-year-old Ørnulf Pedersen from Oslo was riding his bike on Ekebergsletta, Oslo on Monday when police swooped.

Pedersen was travelling on an electrical bike powered by a home-made battery to watch the Norway Cup football tournament. Police mistakenly took his bike's  battery-pack for a bomb device.

The elderly Norwegian said to "VG" he cycled a lot, but at his age, and a recent bypass-operation, had made him dependent on a motor on his bicycle.

The battery pack was from China and he had attached it himself using tape onto the luggage-carrier of the bike.
Pedersen said to “VG”: “I mapped out the course to the KFUM hall in Oslo to see the match program for the Norway Cup.”
But when he parked his bicycle outside the KFUM hall, he suddenly saw seven armed police officers behind him.
Pedersen explained: “I was so stupid to have put my arms in the air as a joke.”
Several of the police officers reacted quickly and put their hands on their guns, but soon understood that the 82-year-old did not pose a serious threat. They checked his driver’s license and a policewoman explained why they had stopped him.
Pedersen understood the police were on high alert. He said: “One of the police women questioning me said that they spotted me on the road of Vårveien, so they probably followed me all the way up and over Ekebergsletta.”
Police officer Finn Belle confirmed they had stopped a bicyclist at 12.10pm on Monday.
Belle said: “It was a security guard who reported a bicyclist with some duct tape and wires on the luggage carrier in the back of his bicycle.”
The police concluded that the “bomb” was an electrical battery and let Pedersen continue his bicycle trip.
The 82-year-old said: “They made a report, so now I'm in the police registers.”
Pedersen added that he is not afraid of travelling to the Norway Cup again, but that he will take care to cover the luggage carrier of his bicycle.
He said: “I don't want to get into the same kind of trouble again.”