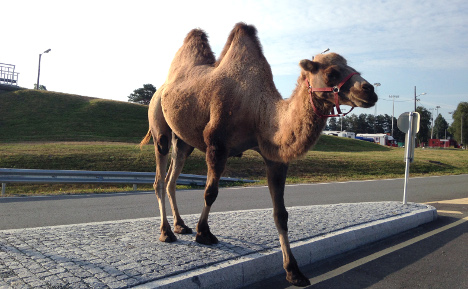 Car drivers in Stjørdal, North Trøndelag, certainly saw the circus had come to town when the unnamed camel was spotted standing, eating grass on a local roundabout.

Police chief Stig Roger Olsen said to NTB: “One of Circus Arnardo's camels spent it's morning grazing on a roundabout.”
The police were notified of a camel on the run in the centre of Stjørdal early on Tuesday morning.
Olsen says: “Of course, we get a lot of phone calls when there's a camel on a roundabout in Stjørdal.”
The camel was quickly rescued and returned to the circus after an animal keeper from the Big Tent arrived to help the police. By simply talking to the camel, the man was able to direct the animal back to its home at the circus.
One witness of the camel calamity was Johan Reinert Vikan. He said to adressa.no: “I was on my way to the dentist with my five-year-old son. The boy was aware that it's not usual to spot a camel on the road, so it was a little odd to see one. My son certainly got something else to think about [on his way to the dentist].”
The camel is confirmed safe and unharmed after the incident.
The police have no idea how the camel escaped from the circus or how it travelled until it was found.