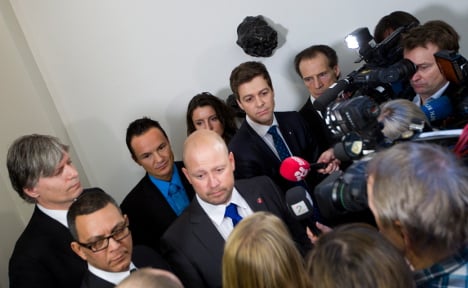 “The PST [Norway’s security police] recently received information that people with links to Islamic extremists in Syria may intend to carry out attacks against Norway,” PST chief Benedicte Bjørnland told a press conference in Oslo on Thursday. She added that the attack was planned to take place “within a few days from now.”

“The PST has warned several times that extremist Islamist groups in Syria intend to carry out terror attacks in Norway. We often receive such information, but often it turns out to be inaccurate. However, on this occasion our suspicions have been backed up,” she said.

“The resulting investigation we have carried out leads us to believe that this is credible, while unspecific. This is related to people who have participated in fighting in Syria,” she said.

Norway's intelligence services estimate that between 40 and 50 people with links to Norway have fought or are fighting in Syria.
Justice minister Anders Anundsen said people should be vigilant and follow instructions from the police.
“But it’s important not to judge people,” he told the press conference.
Police on alert
All Norwegian police districts have increased their level of alert, Bjørnland said:

“We have called in people from their holidays and want to work to confirm or disprove the information we have.”

Bjørnland added that further information would be limited out of respect for the security service's sources. She added that the PST did not know who was behind the threat, nor where or how any attack might be carried out.

The PST said it was releasing the information in the hope of preventing the attack. Police are raising their alert level, said acting police director Vidar Refvik:

“People will mostly notice our increased level of alert through increased presence at border crossings, among other things. The police will be armed,” he said.

Increased security at nuclear reactors
Security tightened at the atomic reactors in Kjeller, Oslo and Halden, south of Oslo. Viktor A Wikstrøm, communications director of Institute of Energy, said to Adresseavisen: "Our security people are in place and have taken all the neccessary precautions. We have continuing contact with PST."

Prime Minister Erna Solberg said she was informed of the threat against Norway on Wednesday evening. She told news agency NTB that she trusted police to take the necessary actions.
“This is a terror threat against Norway that PST and the Norwegian Intelligence service judge to be credible,” she said, adding that the decision to inform the public was made in light of the intelligence services’ policy of increased openness.
“I trust the police to keep abreast of the issue and take necessary actions, the PST and Intelligence Service to cooperate effectively through the joint counter-terrorism centre.”
Solberg has postponed her planned summer holiday in light of the threat. Secretary of State, Sigbjørn Aanes says to NRK:"I can confirm that Erna Solberg should have gone for her vacation together with her family today."

Following the information about the threat, Oslo City Hall announced that it would not open to tourists until further notice.
“We are currently assessing the situation. We will have a meeting at 1pm with experts who will carry out a security assessment,” City Hall manager Bjørn Risvik told NTB.

The Royal Palace in Oslo has cancelled all tours of the building until further notice. The move was decided by the Head of Court on Thursday.

Tickets pre-paid for tours will be refunded at the ticket office (billettservice.no).

The Chess Olympiad to be held in Tromsø – the world's third biggest sports event and 181 nations scheduled to take part – said they have a "security plan" and are working with the Norwegian authorities and police, said organisers on their official Twitter account.

The Jewish Museum of Oslo has been closed because of the terror threat against Norway on Friday. Rolf Kirschner, assistant manager of the museum said to NTB: "As a potential target, we have made this decision. It is sad. We have nice exhibitions going on, but we cannot risk the lifes of our staff and the visitors."

Flights unaffected
Armed police were patrolling Oslo's Gardemoen airport at lunchtime on Thursday.
SAS, Norwegian and Avinor said flights were running normally. Neither the airlines nor airport authorities had been contacted by police regarding the threat.
Marit Kjær, communications director at the airport said they had not raised the threat level. "For the time being everything is running as normal," she told NTB.
UK and US travellers must 'remain vigilant', say embassies
Officials at the British Embassy told The Local that they were aware of the situation, but had not changed their travel advice for British citizens visiting Norway. The Foreign Office website noted the Norwegian warnings and advised travellers to 'remain vigilant'.

The American Embassy has issued the same warning to travellers. They emphasise public institutions, businesses and especially US embassies are targets for terrorists and extremist groups.