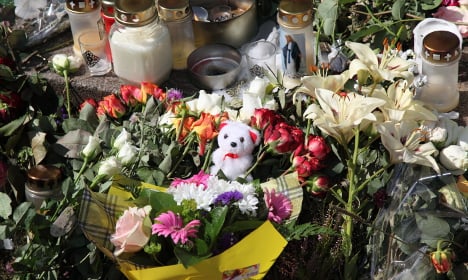 77 people were killed and around 90 wounded in the terror attacks carried out by Anders Behring Breivik.

On Tuesday, Oslo marks the third anniversary of the massacre with a public forum at government headquarters, at the water mirror towards Akersgata. It will be opened by John Hestnes, assistant leader of the National Support Group, formed after the killings.

Following this, the AUF (Workers' Youth League) chairman, Eskil Pedersen, and prime minister Erna Solberg will make speeches. The prime minister will lay down a wreath, and there will be a minute’s silence to remember the victims. Representatives from the Norwegian government and parliament will be present.
There will be a performance by Norwegian pianist and singer Maria Mohn.
At 12am there will be a service of hope in Oslo cathedral. Crown Prince Haakon will be present among others.
The full Oslo event will be broadcast directly across Norwegian media.
Across Norway's municipalities, wreaths will be laid down at memorial stones for the 77 people killed in the attacks on the government quarters and on Utøya island.
In Trondheim, there will be a memorial ceremony in the city hall park at 2pm.
The Norwegian prime minister will take part in a special memorial ceremony on Utøya at 4pm on Tuesday.  The National Support Group and AUF will join Labour Party chairman Jonas Gahr Støre, AUF chairman Eskil Pedersen and leader of the support group, Trond Henry Blattmann. All will make speeches.