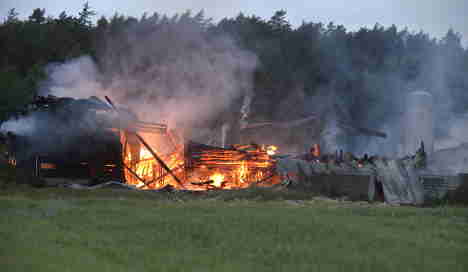 Around 250 pigs were in the barn when the fire started around 9pm on Monday evening,

An unconfirmed number burned to death inside the building during the blaze. While many pigs escaped, vets who arrived on the rescue scene were forced to put down many of the injured or badly burned animals.

A nearby residence was not damaged. The barn was completely destroyed by the blaze and local fire crews fought the fire throughout the night to gain control of the situation.

No people were injured during the incident or inside the pig barn when the fire started or during the blaze.

It is not yet known how the fire started.