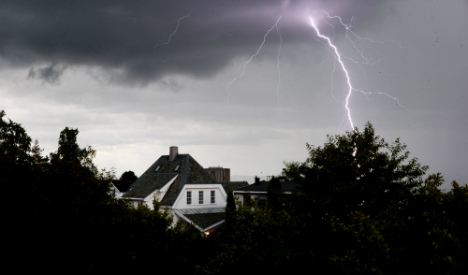 Photo: NTB Scanpix
Some 72.8 millimetres of rainfall were recorded at the Blindern weather station in Oslo on June 27th, the highest recorded in any month of the year countrywide. The previous day saw a downpour of some 46.1 millimetres in just 60 minutes, according to the monthly statistics from the Norwegian Meteorological Institute.
Juvvasshøe Lom in Oppland recorded the coolest June temperatures with a monthly average of 2.1C with a low of -6.8C on 21st June.
At the other end of the temperature scale, Sigdal in Lower Eggedal in Buskerud sweated in highs 28.6C on June 18th.
For the country as a whole June was generally warm with average temperatures of around  0.3 degrees above normal. The month was therefore among the 35 warmest June months of 1900. The warmest June on record occurred in 1953 when temperatures nationwide came in 3.7 degrees above normal. The coldest June since 1900 was in 1923 with average monthly temperatures of 4 degrees below normal.
While Oslo continued to break rainfall records on an hourly and daily basis, the whole southern region was generally wet with twice as much rain as normal.
Åfjord in Sør-Trøndelag received 144.3 millimetres of rain in June. Over Mannen in Rauma recorded some 183.5 millimetres of rain, and Åkerneset in Strand 157 millimetres.
Nearby Lista lighthouse in Farsund in Vest-Agder was however the driest place in the country with a mere 5 millimeters of precipitation recorded, only 7 percent of normal for the month of June. Several other areas of the county, which surrounds the city Kristiansand, experienced a shortage of rain.