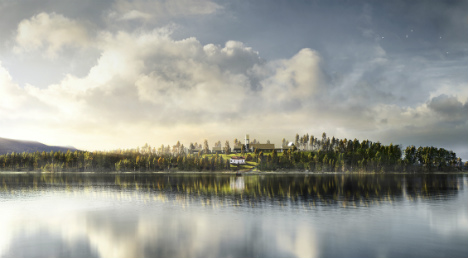 Photo: NTB Scanpix
After massive criticism AUF has decided to leave parts of the café building and pump house by the water on the north side of the island standing, according to a report in the Aftenposten daily. A total of 27 young people – all 13 and 14-years-old – were shot and killed in these locations on the island on the fateful day almost three years ago.
A further seven were killed by the entrance or outside the building.
"We have never had any wish to forget July 22nd, and erase this from the story of Utøya. I regard the tearing down of the parts of the building that have visible traces would be a mistake," said AUF leader Eskil Pedersen.
When AUF presented plans for "new Utøya" it was suggested that the café building and pump house be demolished and replaced by a new and modern construction. Bjørn Ihler, one of the survivors of the massacre which claimed 69 of the 77 lives taken that day, described the plans as "stomping on a dead man's grave."
The café building houses a small hallway, part of a larger hallway, which was where many AUF members hid and managed to evade the right-wing gunman Anders Breivik.
"We have several survivors and their families who are affected and survivors who were on the premises on July 22nd. I would think they would appreciate that the buildings were preserved," said Trond Henry Blattmann of the July 22nd national support group.
The buildings are not the first controversy in the construction of the new Utøya and in the discussions as to how to remember the events.
Norway's government in April yielded to protests against the controversial planned memorial to those murdered, delaying the start of work on the scheme for a year.
Parents of several of the young people who were killed in the attack complained that they had not been consulted, while locals living near the site have described the proposed monument as "a rape of the landscape".
The planned memorial, Memory Wound by Swedish artist Jonas Dahlberg, won acclaim across the world when it was unveiled in March, but quickly generated opposition from locals.
The artist plans to create a "permanent scar" on the landscape by carving a three-and-a-half-meter wide slice out of the Sørbråten peninsular, which juts out into the Tyrifjorden towards Utøya.