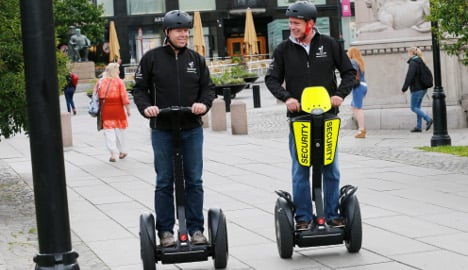 Get on a Segway and celebrate their new legal status in Norway. Photo: Terje Bendiksby/NTB scanpix

The historic date saw the lifting of a ban which classified standing wheel vehicles as forbidden across the nation.

Segways were banned because their top speeds of 20 km/h (12 mph) classified them as mopeds in Norway. This requires users to have a driving license, vehicle registration, insurance and to wear a helmet. The Norwegian Public Roads Administration then made them illegal, ruling them too unsafe to be used in public.

The machines cost around 60,000 kroner and may prove to be a popular tourist and consumer product in one of Europe's richest countries.

Trond Blindheim, principal of Oslo's Marketing College told news agency NTB: "It would perhaps have been strange for many that the Segway has not been permitted in Norway before, and there have been political struggles about it. The increased attention is clearly having a great marketing effect for the product."

This week more than 250 Segway stories about the gizmo, of which the best known brand is the Segway, have appeared across the Norwegian media.

Head Ole Gjermundbo, head of Segway Norway expects to sell far more vehicles to businesses than to private customers. "It is a high-end product that is expensive, but we do expect some private customers, who either buy it for fun or because they have got a functional need like difficulties walking."

Gjermundbo declined to say what his company predicted sales to be in Norway, but can usually expect to sell "a few hundred machines each year" in all their market countries.