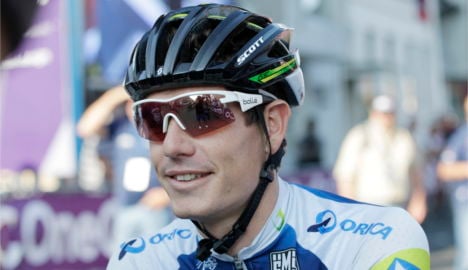 Thor Hushovd won the South Coast Grand Prix ahead of Alexsander Nevsky and Lars Petter Nordhoug in Kristiansand Friday night. Photo: Tor Erik Schroder / NTB Scanpix
The 36-year-old BMC rider says he has been badly affected after contracting mononucleosis which has often left him drained of energy.
"I felt the virus developing in my body and had some good spells, but it happens that I feel really down and very weak physically and mentally," revealed the 2010 road race world champion.
"I asked myself about continuing and answered 'that was enough'."
The burly Hushovd, burst onto the scene in 1998 when he won the junior world championship time-trial race before turning professional with French team Credit Agricole in 2000 where he remained for eight years.
Between 2004 and 2011, he won ten stages on the Tour de France, was the first Norwegian to wear the yellow jersey, and won the green points jersey in 2005 and 2009.
He also won stages on the Giro d'Italia and Vuelta as well as winning the Gent-Wevelgem one day classic in 2006.
Known as the 'Bull' or 'Viking', Hushovd was also a double national champion in both the Norwegian championship road race and time-trial.
After leaving Credit Agricole, he had spells with Cervelo and Garmin before finishing with current team BMC.