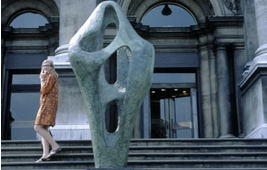 Figure for Landscape outside The Tate in London in 1968. Photo: Kunsthall Stavanger
"We are fantastically pleased with the outcome of the auction. We've got much more than we dreamed of," Eirik Moe, the gallery's chairman told the Aftenposten. "We can now ensure a predictable operation going forward."
The Stavanger art gallery had been forced to put the work up for sale to rescue it from closure, spurring a legal battle with Stavanger Byselskap, the local benefit society which originally funded the purchase.
Hepworth’s estate was also critical of the sale, calling it “unethical”, because of the reduced price at which the artist had sold the work to the society.
In their brochure, Christie's said the sculpture should go for between about 10-20 million kroner.
According to Norway's Stavanger Aftenblad newspaper, the winning bid could conceivably have gone to a Norwegian, although Christian Ringnes, the most likely candidate denied that he had submitted the winning bid.
"There were bidders from Norway, the USA and England," Andre Zlattinger told the newspaper. "It is up to the buyer whether he will reveal it".
Dame Barbara Hepworth, who died in 1975 when her studio in Cornwall caught fire, is one of the major British sculptors of the last century.
The two-and-a-half meter high sculpture has stood outside the gallery in Stavanger ever since it was bought in 1968