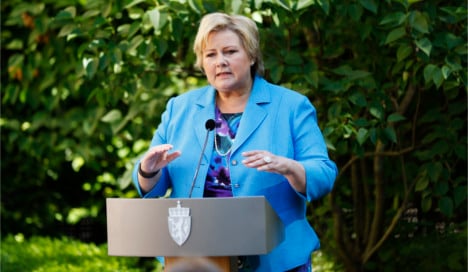 Prime Minister Erna Solberg gives her pre-summer press conference. Photo: Lise Åserud / NTB Scanpix
"I have never considered private school for my children," Solberg said at a press conference summing up her government's work before the summer break, adding: "I respect any family's right to make choices for their children."
Norway's Crown Prince Haakon and his wife Mette-Marit on Tuesday  announced that they would move their two children from the municipal school where they had been studying, to private schools.
The move drew unusually strong criticism from Norway's Labour Party Martin Kollberg, who called the move "a very clear step away from people and a step towards the abolition of the monarchy".
In a joint statement, the couple said that they were sending Princess Ingrid Alexandra (10) who is second in line to the Norwegian throne, to the English-medium Oslo International School, so that she would be better equipped to carry out international duties. Her brother Sverre Magnus will attend the private Oslo Montessori School.