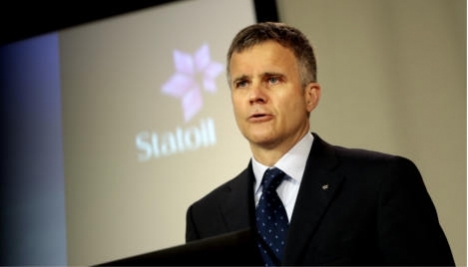 Helge Lund presenting Statoil's first quarter results last month. Photo: Lise Åserud/NTB scanpix
"We can increase somewhat but we cannot replace Russian gas,"  the company's chief executive Helge Lund told Reuters on the sidelines of the World Petroleum Congress in Moscow on Tuesday.
After Russia's Gazprom, Statoil is the second biggest supplier of gas to the European market, with a share of around 14 percent.
At a press briefing, Lund warned that rising costs in the oil and gas industry risks undermining its profitability.
"This is absolutely one of the biggest challenges this industry has," he told reported. "I do not think it is a fight between suppliers and operators, I think we have a common challenge we have to solve together."
Lund recently launched a plan to drive through annual cash flow savings of $1.3 billion from 2016.