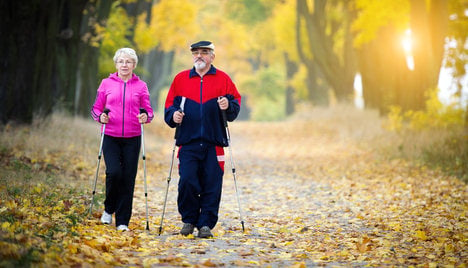 An elderly couple Nordic walking/Shutterstock.
According to the higher range offered in the agency's 'Population Projections, 2014-2100', published on Tuesday, men will live to 97 years old in 2100, while women will live to 98.1 years old.
"The number of adults and elderly will increase sharply over the coming decades," the agency wrote on its home page. "The increase will be particularly sharp among the elderly aged 70 and over."
By 2060, it warned, a full fifth of the population will be over 70, up from 11 percent today.  Those over 80, meanwhile, will make up a tenth of the population ,compared to four per cent today.
According to the projections, the country's population growth was projected to slow in the coming decades. The number of people living in the country would nonetheless rise from today's five million to hit six million in 2031, and seven million by 2065, one and a half million of whom will be immigrants.
This population estimate assumes that immigration falls from the present rate of 40,000 to 50,000 people a year to around 15,000 to 20,000.
If migration remains at the present high levels, immigrants and Norwegians with two immigrant parents would make up some 41 percent of the population by 2060.