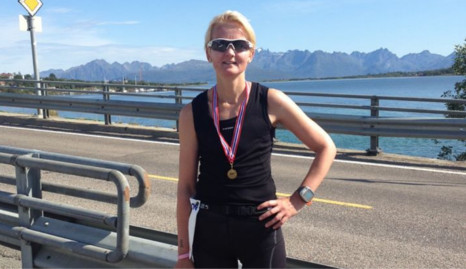 Louise Skak enjoying the Norway countryside. Photo: Facebook
Louise Skak, a keen swimmer and sportswoman originally from Denmark, discovered she had the BRCA1 gene defect after her sister tested positive for the gene in Denmark.
"After my sister was told, I received a letter in the mail from the Vejle Sygehus in Denmark. It said in black and white that since my sister had this cancer gene, I was also at risk," Skak told Aftenposten.
Tests at Oslo University Hospital revealed that she too had the gene, and she soon resolved that she wanted to remove as much of the risk as possible, even though this would mean forgoing the chance of having her own biological children.
"I spent a little more time to decide to remove the ovaries and uterus as well, but have not regretted the decision for a single day, even though this led me directly into the menopause," she told the paper.
Unlike Angelina Jolie and the overwhelming majority of mastectomy recipients, Skak decided not to have reconstructive surgery on her breasts.
"My identity is not dependent on my breasts. I did not want an additional procedure and the side effects which go with it," she said.
Skak said she was grateful that modern genetic testing meant she could discover that she had the gene, and therefore cut the risk of getting cancer by as much as 80 percent.
"I'm not yet middle-aged, and I intend to live to one hundred," she said. "I can only do that because I had the opportunity to have genetic testing."
Angelina Jolie last year wrote a touching article in the New York Times in which she explained her decision to have a double mastectomy after learning that she had an 87 percent risk of breast cancer and a 50 percent risk of ovarian cancer.