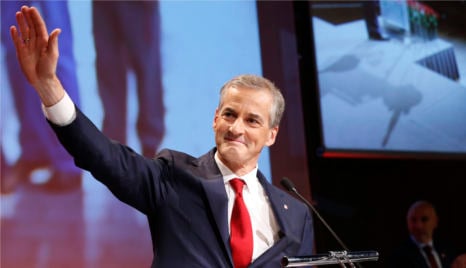 Jonas Gahr Støre after he was elected leader of the Labour Party on Saturday. Photo: Lise Åserud/NTB Scanpix
Jonas Gahr Støre, the son of a wealthy ship-broker,  named climate change as humanity's "biggest problem" as he was voted in as leader at a meeting of Labour Party delegates on Saturday afternoon.
"We are the first generation to fully see and experience the effects of climate change and perhaps we will be the last generation to be able do anything about it," he told activists. "Our response should be, 'Join!, Join with me to build a zero-emission society in Norway.'"
Støre announced that he would lead a new climate panel within the party tasked with developing new proposals to combat emissions, with a view to forcing a new climate agreement through the country's parliament if the party wins the next general election in 2017.
Climate change, he stressed, would be the party's overwhelming priority, informing its policy decisions in all other areas.
In an implicit criticism of the party's policy during the last government, which largely rested on promoting emissions reductions internationally, Støre said that Norway also needed to make big efforts domestically.
"Our only response can not be that Norway should buy emission allowances," he declared, before outlining a series of concrete measures the Labour Party would aim to push through.
These included:
Trine Skei Grande, the leader of Norway's Liberal Party, gave Labour's new harder-line climate policy a cautious welcome, but questioned the extent to which the rhetoric would translate into policy if the party regained power in 2017.
"I've never seen Labour prioritize the climate when it costs anything politically," she said. "We have seen in the past that the Labour party is greener in opposition than in power."
When in power, Labour did nothing to prevent state oil company Statoil investing in highly emissions-intensive oil sands in Canada, or prevent oil exploration in environmentally sensitive regions such as the Arctic or the Lofoten islands. It also scrapped a carbon capture plant at the Mongstad oil refinery.
In a joint interview last week, outgoing Labour leader Jens Stoltenberg defended Støre for his elite, wealthy background, pointing out that Olof Palme, the radical campaigning leader of Sweden's Social Democrats had had similar origins.
"Olof Palme came from a wealthy family and grew up in the Stockholm equivalent of [Oslo's] West End, but he was one of the greatest social democrats," Stoltenberg said.
"Jonas has many of the same characteristics as Palme: he is intellectual, he has the ability to formulate visions and dreams, he is a good speaker and good at seeing the big picture."