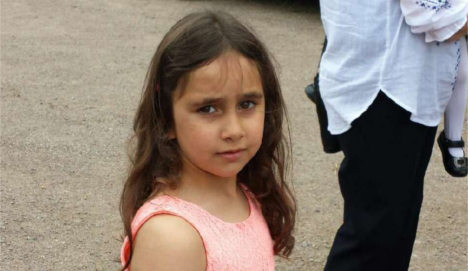 Rajana Dudaeva, born in 2007, who was abducted along with her eight-year-old sister Somaja on Tuesday. Photo: Police / NTB Scanpix
Police are looking  for the girls' Chechen father, who prevented the foster parents from calling the police after they were bundled into a silver car, probably a Toyota, on Tuesday afternoon.
The father, Mansur Mahashev, was already facing trial on charges of neglecting Somaja (eight) and Rajana (six), who had been placed into foster care in connection with the case.
Police prosecutor Johnsen Dahl told VG that Norwegian police feared that the girls would now be brought back to Chechnya, and had as a result contacted airport authorities in Norway and Sweden.
"There is always reason to fear that that might happen when parents have a background in another country," he said.
When the girls arrived in a school bus, Mahashev blocked the two foster parents from calling the police, while the masked men seized the children. He then ran away on foot.
Immigrants to Norway have frequently fallen foul of the  country's child welfare authority. In December, a Brazilian woman sought refuge in her country's Oslo embassy after the authority tried to take her three-year-old daughter into care.
In 2011, the Polish private detective Krzysztof Rutkowski, known as the 'children's Rambo', mounted a series of operations to seize children placed in foster care. In July, he seized a nine-year-old Polish girl from the custody of Norwegian authorities, and repatriated her, and then in November he did the same with a teenage Russian boy.